A Nip In Napa

I just got back from California, trekking down the state these past eleven days, freezing my backside off ‘cause I thought it only got cold in San Francisco but the rest would be sunny and warm like the Beach Boys’ promised.

We drove into Yosemite under a silent snowfall, watching the white flakes glittering against the blue sky and settling like frosted crystals on the ubiquitous evergreens and stately redwoods.

That should’ve been my first clue. The second was getting out of the car.

“It's May,” I wanted to inform Mother Nature, but she obviously didn’t receive her newest park calendar.

So I hurriedly bought a quilted vest to layer somewhere on my body as we hiked out to see El Capitan, “the chief,” the tallest mountain in the park, a forbidding gray rock of granite looking down at all the rest. (Photo above)

While my husband snapped the usual array of redundant pictures, the mountain from a side view fifty-five times before taking eighteen steps to the left and getting that angle too, we saw others attempting to climb the sheer stone, scrambling like ants from the ground and sleeping inside the jagged crannies midway to the top.

I breathed a sigh and thanked God for not giving me the “mountain climbing gene.” I got the neurotic “clean grout one,” which I’d take any day over the “Everest-Capitan” crap.

Well, we were certainly ready to get on the road and relax in Napa Valley, passing thousands of grape trees before stopping at Korbel Winery.

Korbel said they brewed champagne, though they knew full they’re not suppose to call anything champagne that wasn’t made inside the Champagne Region of France.

But either Korbel forgot the rules or the Champagne police were sleeping off a bender ‘cause nobody squawked when we were offered free samples of their bubbly brew.

Totally outside of character, I gushed down the contents of the first and then gulped the next two.   Gee, I couldn't remember what the guide called it because my head was lolling, and I was doing some of that rapid eye movement you’re only supposed to perform in certain stages of sleep.

Well on to the castle of William Randolph Hearst, the media mogul who by 1919 made ten million a year before the creation of income tax and social security, and that wasn’t counting the billions he would inherit from his parents’ estate.

This castle was only one of 36 homes.   I wonder if he knew all his addresses, servants names, and how did he answer that most basic question, “Where do you live?”

Maybe nobody asked him.


We drove down to San Diego.

On the way I saw a maze of pastures, the ocean—blue-green waters, white waves crashing against the shore, malls, skyscrapers, grand hotels, old missions, mansions, and hovels too.
And everywhere, people smiled.

Sometimes it’s important to make a point.  Sometimes life’s just sits there and offers a front row seat.  If you get a chance, grab it, sit back, and enjoy the view.
Posted by terry neuman at 12:33 PM No comments:

USA skeleton skater Noelle Pikus-Pace (pictured) keeps a snapshot of her daughter in her helmet.

The histories of superstition and sports have intertwined for centuries, supposedly even the ancient Greeks carried a lucky stone to the Olympic Games.

But do the powers of lucky charms really work?

New research suggests that they do make a difference. They give us more persistence, memory, and accuracy.

But they can also give us false confidence.

Racetrack regulars see it every day. There’s always someone who feels that today's his special moment, his reason for living, for being here at this moment, and placing his lucky bet.

David Canetty wore his lucky brown suit to cheer the horse he co-owns, "Always a Party," at the Aqueduct Race Track in Queens, N.Y. The brown suit had proven lucky two years ago at the Preakness Stakes when another horse he’d co-owned, finished second.  It was a 40-to-one long shot.  But at the Aqueduct today, "Always a Party" was bumped early and the jockey went flying.

Later, Mr. Canetty, promising to buy a "better suit," threw the brown one away. 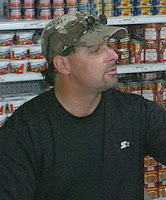 But how about pitcher Turk Wendell, who brushes his teeth and chews licorice between every inning?

And how about me?

I used to carry a Swiss 5 Frank piece in the change compartment of my wallet, but it slipped out a few years ago, and I forgot about it until yesterday.  It used to be important and suddenly it is again.

I had brought it back from my trip to Europe in 1969--when Neil Armstrong walked the moon, Teddy Kennedy parked his car on the bottom of Chappequidick, and Charles Manson and his girls roamed the tony streets of L.A.

Has the world since collapsed?  Not quite, but I wonder.  We've been fighting an endless war on two fronts, and during this time have seen lots of hurricanes, earthquakes, floods, and stock market failures.

Though most of us avoided ruin, it's not natural to keep tempting fate.   In fact, don't tempt anything without a lucky something in your pocket or a ritual that can offer a modicum of confidence.

Red Sox shortstop Nomar Garciaparra gets dressed the same way every day, making sure to step on each dugout step with both feet, tug at his batting gloves, and tap his toes during each time at bat.

So am I nuts, I wonder, backing away from the computer and grabbing my purse.  I'm on the way to a coin store, suddenly in a rush to search for Swiss money, hoping to get me a five.

( note to all my friends.  I'm going out to California, so I'll be missing a couple blogs, but I'll be back with lots more to say.   I'll miss ya)
Posted by terry neuman at 1:49 PM No comments: