NRA, the Group that Keeps on Killing

So the National Rifle Association got its way, and Florida passed the “Stand Your Ground” law in 2005.    It’s a self-defense bill, not that we didn’t have that protection before.   We had plenty.   If  someone’s attacking you, you already had every right to defend yourself.   But it used to be that if your could, you retreated.  You allowed the cops to handle what they were paid to do.
But that’s all changed.  Now you can shoot back.   You can “stand your ground.”  You don't have to retreat, you can fight, and Floridians have followed the law.
Since it passed, homicides have skyrocketed 200%


Two hundred percent, folks.  That’s a lot of murder.
This sick legislation allowed a nut like George Zimmerman to pretend he’s the good guy while hunting for young blacks to lord it over and finally kill.   No, I'm not going overboard.  I believe that Zimmerman was on his own private mission, and he wasn't going to stop until he pulled that trigger.
What kind of man is he?   He called the cops 46 times over the past few years with complaints about open garage doors and suspicious people.   Although never attacked, he needed a gun to do his job for Neighborhood Watch.  Armed for Neighborhood Watch?


But was he justified?   Hopefully a jury will decide, but I can’t believe that they’d find this man innocent.  Let’s face it, Zimmerman had a problem.  What kind of crazy calls the cops constantly?


Yet when he shot and killed an unarmed boy—while running an errand for his sister and on the phone with his girlfriend—the cops never questioned it?   Must be because Trayvon was black and Zimmerman wasn’t.
And this law about standing your own ground told him he was justified.
This allowed George to make up any story he wanted, and the Sanford cops believed every word, probably thanking him for his service because no investigation was ever conducted.


They didn’t measure Zimmerman’s alcohol level or administer a drug test.  The guy shot, killed, and walked away Scot free.  Yeah! Go cops and the NRA!
And Zimmerman almost got away with it.  It took 26 days for the black community to come together, screaming foul until reality spread through the country and one million people signed a petition.  Zimmerman, the honored citizen, ran for cover.


And Sanford police chief Bill Lee finally took a temporary leave.  How about making it permanent?  If the man can’t see the injustice of killing an unarmed teen, he needs to be stocking shelves in Publix from midnight to dawn.  Anywhere but in the position of making intelligent decisions.
I look at Trayvon’s pictures every day on the internet and see a kind, gentle boy.  He was beautiful.  Then I look at the hurt in his parents’ eyes, their sadness so engulfing, the wound so driven, it will takes years to heal, if ever.
Stand Your Ground, sensible Americans.  Get this law repealed.
Posted by terry neuman at 12:53 PM No comments:

Labels: Honey Boo Boo and Lance, Trayvon Martin and Stand Your Ground, trying to keep up

Maria and Arnold are BACK! 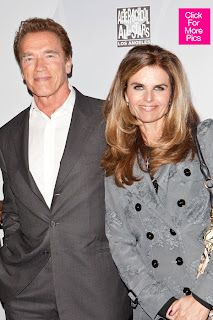 So Maria and Arnold are reconciling?  You serious?   You mean she forgave him for his long term affair with their housekeeper and the illegitimate son he fathered under her nose?   According to Newsweek, the promiscuity was so intense, so ubiquitous, it made Tiger Woods look like a bashful cub.
And now she wants him back?  Where’s her dignity, her honor?   Or maybe it’s love?  Or religion.
Maria, a devout Catholic, can’t bring herself to divorce Schwarzeneggar, and Arnold wants her because he has no political clout without his wife.  The two are presently in counseling and were recently seen canoodling at a popular restaurant in Santa Monica.   The whole thing’s sort of like a fairytale—no public screaming, or he-said, she-said.  I’m not one to judge what goes on behind closed doors, and I always enjoyed happy endings, but if this were a movie, ticket holders would complain that the plot wasn’t realistic.  The ending doesn't fit the action.  It’s like a tsunami flooding the gates of the castle with a thousand soldiers climbing the walls behind the water, and then everyone lived happily ever after.
Jenny Sanford, who divorced her husband Mark, the governor of South Carolina after running off with his mistress in Argentina said, “Marriage is very personal. I wouldn’t tell her to leave or not.  I would tell her to be very prayerful.  And if you know it’s not right after that:  leave.”
So go ahead and give him a second chance.  Maybe their marriage will ultimately overcome Schwarzenegger’s transgressions, and the knowledge that the whole world's watching.
Besides, others are in the forgiving mood too.
Rock stars Rihanna and Chris Brown have also reunited, three years after he almost beat her to a pulp.  I guess that’s the ultimate test of trust because if he ever lets go again, she might not be around to tell the dirty tale.
Posted by terry neuman at 8:53 AM No comments:

Labels: Honey Boo Boo and Lance, Maria and Arnold are back, trying to keep up

So Rush Limbaugh opened his mouth again last week and spewed out more dirty lies and hatred, this time slurs against women.

Sandra Fluke, a third year law student at Georgetown University, testified before Nancy Pelosi’s committee about the need for contraceptive coverage in a government sponsored health bill.   Suddenly, these were fighting words for Rush.

“So Miss Fluke, and the rest of you feminazis (his made-up word) here’s the deal," he said.  "If we are going to pay for your contraceptives, and thus pay for you to have sex, we want something out of it.  We want you to post the videos online so we can all watch.”
He then went on to call Fluke a slut and a prostitute and continued to ask again to see the tapes.  These statements were so mean spirited, so filled with vitriol, it got more than one commentator wondering if Limbaugh was into porn.  I mean the man's always asking to watch it.  Was he serious?  If not, then why does he keep repeating it?  Who else but an addict wants to see sex in action?
When he was finished with his tirade, it sounded truly like a hate speech.  Because it was.  This time his subject was women.  It started with contraception and then moved to prostitution.  Doesn’t he realize that women vote too?
Twitter got bombarded with hundreds of angry comments from listeners, who also flooded his advertisers.   Sleep Number, Legal Zoom, Citrix, and Quicken Loan withdrew their commercials from the show.  Pundits and political figures fiercely condemned him.
Yesterday, Limbaugh apologized, in his usual half-assed way.  He said his choice of words weren’t the best in his attempt to be humorous.  Oh really?  You mean he was trying to be funny?
Has he ever seen a comedian in his lifetime?  Can he give us the date and time?

I wonder when people will tired of the dog-do emanating from this guy’s mouth.  The right wingers offered him a pulpit, and Limbaugh stole the entire Republican Party because the regular guys got too frightened to argue and quickly backed away.

Where have you gone Eric Cantor?  Why are you leaving, Olympia Snow?  Somebody’s got to rip that mike from this little Hitler’s mouth.  They got to stop those lies, that hatred, this filth.
I only pray that the sponsors that remain with him will also leave and that the ones who've quit will stay away.
Posted by terry neuman at 8:24 AM 1 comment: