Only to Inspire--our family reunion

I missed Nik Wallenda’s walk across Niagara Falls last Friday.   We were out at the beach for the Schwartzes (my maiden name) family reunion and no one kept track of TV.   Besides, we were busy.   I could've been drowning my grandson with kisses, shlepping chairs and lemonade back to the condo, or yakking with someone while strolling the sands of New Smyrna.  Everyone had stories to tell and we save our best for the beach.  If they’re long and drawn out, even better.  We got plenty of time to listen.
The big story this year was my brother’s recent move.   He and my sister-in-law just sold their house in Denver and moved to another home closer to downtown.  Everyone asked if they downsized.
Not exactly.
The new one's seven square feet smaller, but I bet it eliminates a good ninety seconds of cleaning.  It also holds two hundred bottles of wine in the cellar that the previous owner had built.
Except my brother and sister-in-law don't drink.   But paraphrasing Tevya, it's nice to show.
And we're all happy for them.  “So how'd it go?” I asked.
The movers arrived and worked from ten a.m. until three a.m, but still didn’t complete the job.  They returned a few hours later and worked from one p.m till nine.
Which got me to thinking, do I ever want to move?  We talk about it sometimes but staying in a home for thirty years gives one pause.  Not for the nostalgia but for the multi layers of crap we accumulated and need to toss.
The kids all gabbed about work, friends, and deciding where we’d go for dinner that evening.  At a reunion with serious vegging, everything gains equal importance.
Well we don’t exactly veg.  We need to stay sharp to keep up with the talk and offer opinions, even when nobody asks for them.   And nobody ever does.
You see, the Schwartzes aren’t one of those families where the group politely listens until someone finishes a thought.   We interrupt like nobody’s business, yelling suggestions, and repeating them like immediate executive orders.
It’s a group you gotta get used to.

So we missed Wallenda sashaying along a two-inch wide cable over Niagara Falls while 100,000 people watched from below.   Wow, I thought, seeing the tape.
“Welcome to Canada!” the customs officials called as Wallenda stepped onto their soil.
“And what is your reason for visiting?” one of them asked.   I laughed.   This was cool.
“To inspire,” he said.
And that’s what he did.  A renewal of life, I thought.
Same as our family reunion, a reconnection each summer that no matter what, we belong.
Posted by terry neuman at 6:43 PM No comments:

Labels: Honey Boo Boo and Lance, trying to keep up, Wallenda and our family reunion

I must've been smoking something last night when I was writing my blog on dinosaurs stinking the air.

I said the world's  population was more than 7 trillion when that's hardly the case.  As of today, we're still in the billions.

Sorry for the error.   With that in mind, please enjoy my blog.
Posted by terry neuman at 5:52 PM No comments:

Labels: 7 billion and counting, Honey Boo Boo and Lance, trying to keep up

What Blew the Dinosaurs Away

Ever hear of the sauropods?  Those were the gigantic veggie eating dinosaurs that thumped and creaked over the earth during the Jurassic age, and passed enough gas to fart their way to extinction.
At least that’s what some British scientists say.
The methane gas produced by the largest and dumbest family to roam the earth helped warm our atmosphere, creating greenhouse gases that probably contributed to their ultimate demise. According to David Wilkinson, an environmental scientist from Liverpool, if you stood downwind of an Apatosaurus (formerly known as a brontosaurus) you could expect to by bombarded by a 2,675 gale of methane gas.  Add that to the thousands that roamed over the world—including Antarctica—and dinosaur flatulence produced between 500 and 600 million tons of methane gas a year. 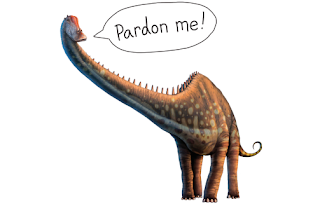 Whoa.   That’s a big you-know-what.   Of course it was not the entire cause of their extinction, but they say it was significant.

That's news, I thought, but it was way back when.  Still, I read on and learned that methane gas produced from cattle grazing around the planet today accounts for 2 percent of our greenhouse gases.  Two percent doesn't  sound like much, but it's forced the earth's temperature to rise from a half to one degree Celsius.  The scientists also said that this situation could be minimized by adding oregano or curry powder to the feed. If only the Apatosaurus knew.
But the whole thing got me to wondering.  There are 7,018, 014, 918  people alive at this time.   That’s over seven trillion, and if everyone suffered a little indigestion…

So how come nobody told me?   Did Dr. Oz  zone out on gas?   He told me to stuff myself with blueberries, broccoli, and plenty of salmon, so I did.  He told me to take fish oil and get fifteen minutes of sun.  He told me to get my blood pressure checked but never a word about curry and oregano.
Hey, “Save Our Planet,” the bumper sticker warns.

But how could I if I didn't know what to do?  Still I hesitated for just a moment.  Curry powder stinks to high heaven, emitting nauseating odors from the pores of my skin.  And it gives me...  Oh my goodness, gas.   But how could I not act upon the world's need?   If the earth can survive, then that’s what we need to do.
So remember the mighty sauropods and smell up your food and your belly so the earth won't crumble away.
Posted by terry neuman at 2:32 PM No comments: