It wasn't an easy afternoon.   The day was cold and dreary, and Lincoln was ill.   Unbeknownst to him he was suffering from smallpox, but he sat and waited, along with the rest of the 15,000 people gathered.

Senator Edward Everett spoke first, rambling on for over two hours.  Long winded to say the least, he finally sat down, and Lincoln rose and spoke his memorable words.
The entire Gettysburg Address was only two minutes long--so quick that many in the audience missed the beauty of its brevity.  Others didn't get it at all, like The Patriot and Union paper out of Harrisburg thirty-five miles away.  The editor called the president’s words “silly remarks” and readily dismissed it. 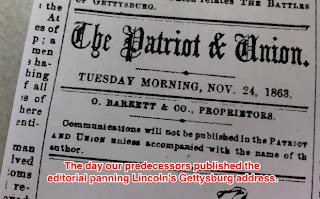 That was 150 years ago, and I guess that negative editorial, which ran against the grain of all the other news at the time, had been bothering the folks in Harrisburg ever since.

A few days ago The Patriot and Union, with tongue in cheek, retracted their long ago opinion, and in the style of the Gettysburg Address printed this:

“Seven score and ten years ago, the forefathers of this media institution brought forth to its audience a judgment so flawed, so tainted by hubris, so lacking in the perspective history would bring, that it cannot remain unaddressed in our archives.”

Within a day, the reaction to their retraction stunned the editors involved.  Every major news outlet carried the story, and thousands of comments and questions flooded into their offices, many begging for interviews.  Even SNL included a special presentation during their “Weekend News.

And after all these years...

I bet old Abe is smiling from his grave.
Posted by terry neuman at 5:38 PM No comments:

And She Never had a Good Word to Say...


It seems that every time a calmly innocent person dies from a violent crime or natural tragedy, neighbors and family trot out from their houses to face the cameras suddenly crowding their street.   Through breaking voices they declare that the victim was the nicest, most caring, giving person they had ever known.


“He was a saint,” they say.  “Always greeted us with a smile and would give the shirt off his back to someone in need.”

Gee, I think, already sorry that I never knew him when the talker offers the clincher.   “You know, he never had a bad word to say about anyone.”


The last line always gets me.  Would someone ever say that about me?   Never in a million years.   Because I have to admit that lots of unkind words have passed my lips.  Like every day.
“Do you see how fat that guy is?” I remark, pointing to the TV while watching a massively obese man on one of the reality shows.  “If he doesn’t shut his mouth, they’ll have to remove him from his bedroom with a forklift.”
﻿


“You won’t believe what just happened,” I say to a friend.  “I talked to this guy on the plane yesterday who worships Rush Limbaugh.  Can you believe it?  Limbaugh wouldn't know the truth if it hit him in the ass, and his audience is so old, they say he broadcasts from Forest Lawn.”


“So tell us how you really feel,” my friends ask, smiling widely.


Most of the time they're silent.


So I try turning a one-eighty, sounding sickeningly sweet, but too much sugar clogs my brain and tangles up my wires.  I can’t conceive a straight thought! I want to shout, suddenly fearful that I’m turning into Sarah Palin, one of the biggest dummies on earth.


And in the aftermath, I wonder, what’s gonna happen to me?


If I perish in a category 5 hurricane called Jeb—I’m not crazy about the Bush family either— I hope CNN skips my street and finds the family of an 85 year old  Alzheimer’s patient, who hasn’t spoken an unkind word in years because he hasn’t spoken at all.


Yet what’s wrong with having an edge, I wonder, or an educated opinion?  Why not tell it like it is?  Mark Twain became renown because of it.  So did Albert Einstein, Billy Crystal, Alec Baldwin, authors Philip Roth and Alice Munro, and thousands of others who thought and still think for themselves.


On second thought I look around and nod.   I have a feeling I’m in good company here.

Posted by terry neuman at 2:02 PM No comments: