So let’s see, the last time we ended we were talking about guinea pigs.
Except I never talk about guinea pigs.  Rodents aren’t my cup of tea or cup of anything else for that matter, but one morning our trip leader, Juan de Dios, told us we were having a true Peruvian lunch at someone’s house.

﻿﻿﻿﻿
﻿﻿﻿﻿ Wonderful.  Peru has fabulous vegetables and fruit, fruit like papaya and mangoes, and tons of others I’ve never heard of before, so I knew it be good.  The fourteen of us and Juan sat down to eat.

“Do you want guinea pig?” the cook asked me.

No answer.  I think I was choking.

But then I wondered.  Maybe I should live like Mark Twain or Tarzan, so I said I'd try it.  An entire fried guinea pig, including the burnt head, was carried to my platter.

“My God,” I said, grabbing more bread, dreaming of a grilled cheese sandwich, as the guinea pig body lay across my plate crispier than a freshly fried onion ring from Burger King.

I ate all the side dishes and kept asking everyone if they were eating their guinea pig.  Some were, some weren't.  Those that had eaten the rodents were still alive.  Should I?  Shouldn't I?  I couldn't look at my plate, and I wasted about forty minutes until it was time to go.  About to leave, I peeked at the carcass.  How could I take off and never have tasted a morsel or even a sliver?  What would that guy from Wild Kingdom do?  What was his name, Marlon Perkins?  He was probably dead, but what did he die from? 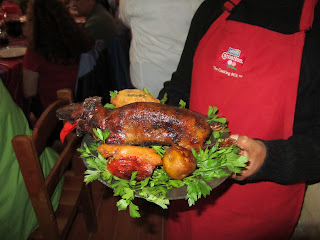 I cut a infinitesimal slice from the leg and slid it into my mouth.  A little overcooked but it resembled the flavor of… Chicken!  I shuddered, jumping up from the table to catch the bus.  How come everything tasted like hen?  And if it's all the same, why do people go looking for something new?

But guinea pigs are so coveted in Peru that when we were invited into a farmer’s home in an old Inca village, ( see top photo) they were crawling all over the kitchen.

It was a one-room house with a floor guaranteed to never show dirt—a genuine dirt floor.  At one end was the bed for the parents (the kids sleep on the floor, see photo below) and at the other, were the guinea pigs that multiplied in the kitchen and were saved for special occasions.
﻿﻿﻿﻿﻿﻿﻿﻿﻿﻿﻿﻿﻿﻿﻿﻿﻿﻿﻿
﻿﻿﻿﻿﻿﻿﻿﻿﻿﻿﻿﻿﻿﻿﻿﻿﻿﻿﻿ I told my daughter Barbra, who’s a realtor: “You don’t have to worry about the condition of the cabinets.  There aren’t any.  Nor is there a counter, and I can’t remember seeing a fridge.  Just a few shelves and a stove."

The bathroom is in a little alcove around the side of the home with a small tub. We weren’t allowed to view it.  No master bath, half bath, Jack and Jill, or shower.

Yet I looked along the street and didn’t see anything for sale.

Peruvians in the city don’t live like this, but the average income is only $5000 a year.

By the way, citizens of this country can't stand paying property taxes, which are cheap, about a couple hundred a year.  So most don’t mail in their checks, and when the tax collector comes, they kick him out, and he goes!

Guess he agrees with them.  Nobody likes to pay taxes.  Yeah, Peru!


Posted by terry neuman at 5:37 PM No comments:

After a two week sojourn to Peru and Ecuador to experience Machu Picchu—the ruins of the great Inca city—and then on to the Galapagos Islands to prove evolution really exists—Sorry, Madam Palin you are wrong, wrong, wrong—we came back home a day and a half ago, exhausted but happy we went.

By the way, I apologize to those that I told that you can only visit the Galapagos once in your life.  Visit forever, as long as you stay just three months at a time.

The islands were nothing like I expected.   Of course, I never read up on them, so I traveled to the equator “cold” and found that the imagined "green" islands were covered with gray lava rock.

Each of the 48 was born of volcanoes, and the animals developed so separately from each other, that there are eleven species of tortoises.  Scientists can look at the shell and tell which island the animal originated.

In 1972 a lone male tortoise was found on the isolated island of Pinta.  They searched everywhere for a female of his species, even asking zoos if they had taken any.   (At that time you could remove animals from the island. Today you can’t take a shell).

So Lonesome George, as he came to be known, was transferred to the Charles Darwin Science Station, where they house him with two females.  Turns out, he’s shown no interest because something’s wrong with his glands.

But today he’s is a legend.  The only survivor of his species, he’s probably over a hundred and fifty.

By the way just a few months back, some guy tried to steal a lizard from the Galapagos.   He stuck it in a jar of water, but they caught him in customs and threw him in jail for five days.  Serves him right.

There’s so much to say. We were such a strange group—fourteen total (not counting our guide) a dozen American and two Canadians.

The Canadian wife was nice, or maybe she just kept her mouth shut, but her husband, I’ll call him Luci, which is part of his real name, which he hates, is anti-Semitic.   A big Anti Semite.

He worked for Kofi Annan—the Secretary General of the U.N. from 1997 to 2006, who wanted to wipe Israel off the map.

I only spoke to Luci during one endless dinner at the start of the trip when he bragged that he was head of the UN mission in Israel in 1992-94 and worked under Kofi Annan for many years.  His face lit up when I mentioned Yaser Arafat.

Luci said I wouldn't understand the Mideast unless I lived there.  Oh yeah, and then I'd love Arafat.

(You know, Luci could be short for Lucifer.  Maybe the schmuck is the devil).

I won’t go into the rest, but I avoided him the rest of the trip.  If I happened to meet him face to face (it was a small group) I glared and walked on.  I finally told another couple, and two days before the end of the trip, I told a few more.   By then Luci had also demonstrated his hatred for the U.S.

He had told everyone that we had a monarchy; we just didn’t know it yet.

Yep, there are nuts everywhere.

But there’s a lot of good people too.

I haven't mentioned Peru, and wait’ll I tell you about lunch with the guinea pigs.  Be thankful you’re eating chicken tonight
Posted by terry neuman at 2:21 PM No comments: