Need a Little More Lipstick? Flip your Cellphone into a Mirror


Yep, you’re reading right.  The cellphone screen morphs into a mirror so that you can easily survey  any fading to your face, or spy on those so-called friends gossiping behind your back.
Whoa, I thought.  What other weird apps have they dreamed up lately?

Lots.  There’s even one for lonely men.
Korean programmers created Mina, a twenty-something model, who appears on the screen armed with a hundred pre-recorded messages that she delivers in regular intervals,
“Are you still sleeping?” “Good night, sweet dreams,” or “time for breakfast.”

On the other end of the fantasy are the naked women.  Remember those novelty pens that flashed a picture of a lady inside the barrel who would magically undress when the pen was tipped?   Well this is the iphone, ipod version.  (see picture). 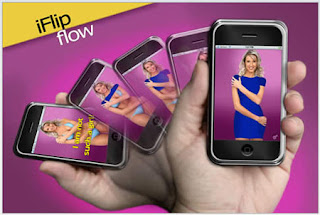 And today there’s even an “ibeer”—a virtual glass filled with the ice-cold beverage complete with tempting bubbles that float across the screen.   Tilt your phone for a more dramatic effect. 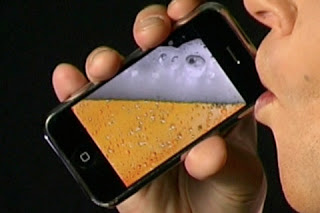 And how about those who skip the virtual beer, but guzzle the real stuff?  You’ll need an “iDrunkTxt” app right away.  This makes  it easy to send messages when you’re slightly intoxicated.  Some of your messages might wind up grammatical nightmares, but your friends will still love you and more important, they'll get your text.
Ever desire an app to pop pimples?   Come on, you remember when you were a teen, and you stood in front of the mirror squeezing those things down the drain?  Well now they got the "Pimple Popper," which allows you to spurt pimples across your mobile screen and watch while they burst off the sides and out of sight.

Maybe you're thinking something more dramatic?  How about a mosquito killer?  Your phone not only attacks those raging insects but becomes a fly and insect repellent too.  Radiating electromagnetic waves, it obliterates those annoying bugs in mid-air.

What will they think of next? I wonder, gratified that there’s so much out there to keep us happy, and even indulge in our desires.
Personally, all I need is the mirror, but on second thought, once I get my lip liner squared, I’m gonna kill those friggin’ bugs.
Posted by terry neuman at 5:13 PM 1 comment:

You Could Sin or Go Shopping


When we traveled to northwest France a couple weeks ago, we saw tons of churches.  They were everywhere we went, and many were the grandest and most elegant buildings we’ve ever seen.
Why?   Because these early people were forced into slave labor and often starved while constructing their houses of worship.
We got to Mount St. Michel (Michel pronounced like Michelle but meaning Michael), an enormous church and monastery, that sits on top of its own island in the Atlantic Ocean.

The monastery was built in the 8th century because St. Aubert had three successive dreams that St. Michael ordered him to create a church in his honor.  And boy was he good at following directions.

Today there are only 24 full-time residents, including 7 nuns and 5 monks, but scores of employees arrive daily to run the multiple restaurants, souvenir shops, and the single hotel.  And there are hundreds of tourists, like us.

Our guide, a slender woman who looked in her sixties, was devoted to this church.  What kind of life did she have? I wondered. If they threw a party, everyone already knew each other, but I said nothing as I followed her down the narrow main street and over to the entrance.
We looked up and saw the many skinny turrets and steeples.  Underneath was a mountain of steps.   Were we supposed to climb all the way up there?

Gritting her teeth, she turned.  Uh-oh, I realized.  I should’ve remembered that zealots don’t have a sense of humor.
Another fifty steps and our guide turned again to tell us that in the Middle Ages thousands of people visited St. Michael’s, but some were so weak, they died on the way up.   The others stepped over them.
Left them for dead?  I wanted to ask.  Well that’s the old Christian spirit.  People were dying, and the church did nothing to save their lives.  They didn’t even try.
Suddenly, this work of wonder resembled a giant tombstone.  If spirits were floating around, they were probably crying from lack of compassion.   So what was I doing here?  A few minutes later, my husband and I left the tour and ignored the next excursion the following morning at another church in the walled city of St. Malo.
Instead, we went shopping.  We chatted easily with the residents or used hand gestures to describe what we wanted.  We're helping boost the economy, I reasoned, and grinned as we strolled through the streets.

Posted by terry neuman at 6:23 PM No comments: