Texas, the state that kills more death row inmates than any other, announced this week that they were giving up its tradition of the special last meal request after an egregious promise was fulfilled.
Lawrence Brewer, a white supremacist convicted of murdering James Byrd, Jr., a black man, in 1998, requested an enormous dinner this past Wednesday that included a triple-meat bacon cheeseburger, a meat-lover’s pizza, a big bowl of okra with ketchup, a pound of barbecue, a half loaf of bread, peanut butter fudge, a pint of ice cream, and two chicken fried steaks.
When the food arrived, he refused it, saying he wasn’t hungry.
Furious, Texas State Senator John Whitmire said, “Enough is enough.  It is extremely inappropriate to give the person sentenced to death such a privilege.  It’s a privilege… the perpetrator did not provide to their victim.”
Yet this tradition has a history dating back before Christ.  The Romans honored it, even the Greeks.  But it used to serve a purpose.  The last meal was supposed to be a symbol of acceptance.  By partaking, the criminal supposedly accepted his fate without rancor, assuring society that justice was served and that he wouldn’t come back to haunt them.
In the last few years other states have also dropped this tradition, finding that death-row inmates ordered the food in anger to get back at society-at-large.
Maybe it was better in the past when the final meal included lots of booze so that the prisoner wouldn’t start screaming about how he didn’t get a fair hearing or beg for mercy to the community at large.

And not too long ago, prisoners were anxious to eat.


Miguel Flores consumed three beef enchiladas with onions, three cheese enchiladas with onions, Spanish rice, a bowl of jalapenos, an order of French fries, a cheeseburger, a bowl of mayonnaise, a bowl of ketchup, a bowl of salsa, three Dr. Peppers, a pitcher of ice, a banana split, and four quesadillas.
Delbert Teague asked for nothing but finally ate a hamburger at his mother’s request.   (No, she wasn’t Jewish, but she must’ve been worried about the long journey ahead.)
Timothy McViegh, the Oklahoma bomber, ate two pints of mint chocolate chip ice cream, and Philip Workman declined anything for himself but requested a pizza for a homeless man in Nashville.  The request was denied, but hundreds of shelters across the country were flooded with free pizzas in honor of Workman’s request.

No, those monsters really don’t deserve anything special, but I like the story about the condemned man who wanted a very rare steak and a bottle of Chateau Mouton Rothschild—from the year 2065.   He added, “And I don’t mind waiting.”
Posted by terry neuman at 7:27 PM No comments:

The Article about Articles

Did you know our articles, those three most commonly used words in the English language, “a,  an,”  and  “the,” suddenly have no use in the digital age?   The marketers and advertisers treat them like dust balls.   They clutter conversation and screech thoughts to a grinding halt.


Never passed your mind before?   I never considered them either.
But Jeff Bezos, the founder of Amazon, spoke with reporter Charlie Rose last year and repeatedly dodged the word the when describing his ebook Kindle.   “Kindle is succeeding; Kindle is a companion to tablet computers...”    He completed the interview with nary a “the” in range.

Nintendo also fitted itself in the same mold, announcing to their customers, “What Wii is all about.”  Both companies set the tone, leading by example while Motion Ltd., the maker of Blackberry, stated it clearly, so no one could misunderstand.  "Blackberry is an adjective, not a noun.  'The Blackberry' is unacceptable."


Oh I get it.  Blackberry might look like a thing but is really a description—even if I can see it, touch it, and slam it against the wall.   Gotta remember that.

Branding gurus defend “the” omission.  According to The Wall Street Journal, they argue that dropping the article makes the brand feel more iconic, less formal, and within easy reach.
Easy reach of what, the consumer walking into a store and purchasing a spankin’ new adjective?  I never bought one of those before.


Yet everything works--if the public accepts it--and as long as grammarians agree.  But the grammarians don't.  They hate it.   In Theodore’s Bernstein’s The Careful Writer, he claims omitting articles is a “disfigurement of the language.”

“When the writer is tempted to lop [one] off, he should ask himself whether he would as readily delete all the other articles.  Would we write, ‘Main feature of combined first floors of new building will be spacious hospitality area?’”
Nope, I don't think so, but that's just for people who insist on getting it straight, and remember Apple’s been creating its own innovations for years.   When Craig Tanimoto, a former art director, came up with “Think Different,” in 1997, chopping off the “ly,” everyone in the office gave him a long look, even Steve Jobs, who then broke into a grin.

Still, can we randomly decide that a machine we hold is not an “it” but merely a description, which means we’ve got to monitor our brains when we speak, forcing ourselves not to place an article in front of the forbidden word.

Count me out of the conversation.  That’s too much energy to exert against all previous education.  I can see using Kindles and Blackberries at the beginning of a sentence but to keep it going forever?  I’ll pass that labor to Mr. Bezos.

He’s a billionaire.  Let him earn it.
Posted by terry neuman at 6:05 PM No comments:

Labels: The Article about Articles 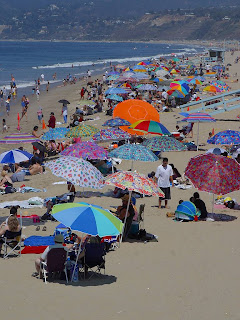 It’s Labor Day weekend, the last flicker of summer for those who live up North.  As for Florida, we can only pretend it’s the end because our summers run through October, much as we’re tired of it, much as we’re sick of our T-shirts and Capris and dying to wear a sweater and jeans.  So what do we do during this three day holiday?   Many run to the beach and veg, but I'm not much for the sun, and besides, it’s sizzling outside.  So what else can I do but sit in a movie or hightail it to the mall and check out the sales. 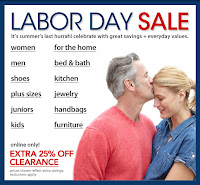 Everywhere.
Labor Day means the world’s becomes one giant markdown.
But should I go?  I don’t need a thing.  Still, I could probably stuff another knit top in my dresser—something clingy and fresh, and deeply discounted (like 60% off) so I can tell everyone it was selling for $148 but I got it for $59.12.  That’s a deal, and a tale I'd like to tell, and isn’t that what Labor Day’s all about?

Didn't used to be.
Not when I was growing up.
Years ago the unions would march the downtown streets of Detroit celebrating Labor, but I only glanced it on TV and never thought it was any big deal.  Who cared about them anyway?  To me Labor Day meant school was starting the very next day.   It also meant my father went boating for the last time that year before hauling his boat out to storage. 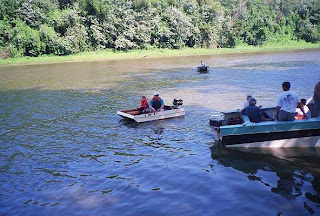 My father, Bernie Schwartz, without an extra nickel to his name, owned a series of clunkers.  Each became his passion, until it broke down—and unfortunately, all of them did—the pistons, the oil filter, distributor, alternator—whatever could jam, rust, spring a leak, or just tucker out—and leave us stranded in the water searching around for a tow.
But those were the bad Labor Days.
During the good ones, we celebrated our last gulp of fun.  When the ignition clicked, we cheered.  We could swim, ski, and dive off the boat.  I don’t remember ever running to sales THAT weekend, or even wanting to.  We were already set for school.  No matter how many hand-me-downs I inherited from my sister, I got brand new clothes for the first day of class—and sparkling saddle shoes without a scuff to be found.
Those shoes. 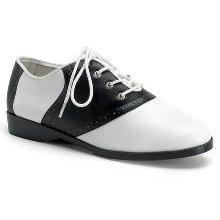 I never knew they were cheap, only shiny, brand new, and mine.
I also knew they wouldn’t look that way for long.  In a few weeks I’d start polishing them white, trying not to spill a drop on the black, but they still never looked the same—not like the first day of school when I hurried along the many streets (no one took buses back then) to meet my new homeroom teacher, to see my old friends, and to revel in the excitement of the day after Labor Day Weekend.
Posted by terry neuman at 8:46 AM No comments: