Sandy the Hurricane.? A Silver Lining Beneath

Well there’s no other news today, tomorrow or forever this week, but THE STORM.
I’m sitting in sunny Florida—well it’s actually dark here this minute—yet calm, cool, and most of all placid.   It’s hard to fathom “the storm of the century.”

That’s what Al Roker called it this morning, but come on.  Really?  Did people forget Andrew in ’92 or Katrina in 2005?  Some news reporter on CNN said that a hurricane was equal to 19 nuclear bombs!
I hope I never know that reality, but this one's more powerful than all of those.

And besides the torrential rain, there’s a blizzard to boot, and the two together will overlap and create the perfect storm.
This one's called Sandy.  I got best friends Sandy and a first cousin too.  Why didn't they name him Elroy?  I'd never miss repeating that one again.

So I'm watching the news, and they're all describing a nightmare.   Okay, I get it already, though a few things elude me.
If there's 19 nuclear bombs going off, how come the reporters are still standing outside?  I saw Diane Sawyer soaked in the rain, her hair and makeup dripping. And Erin Burnett from CNN with the police commissioner of NYC battling the elements at the edge of Battery Park.

I guess the storm alone isn't enough of a story.  They need to get clobbered too?   Or must we witness the drama of those we’re supposed to emulate dragged into the ocean and tossed like a bunch of throwaway dolls.
Oh, and how about those idiots that refuse to evacuate?  Why should anyone risk their life to pull them to safety?   Gee, I love it when the reporters find the stragglers after the storm—freezing, hungry, and often injured.  Like comedian Kathleen Madigan says, somehow CNN finds the lowest of the low, the redneck who’s wearing the hat, “Who Farted?


But there’s always that silver lining.  Today the candidates are taking a break!  And so are the reporters!    The storm's even too big for them!
And the results are unbelievable.  No one's sitting around a table tonight analyzing endless crap.
And if we can miss this week, the election will be over.  Over, I tell you!  So the storm is upon us, and I’m waiting it out in ignorant bliss.
I just hope you all stay out of harm’s way.   Play it safe and be back next week.
Posted by terry neuman at 7:59 PM No comments:

Trying to Keep Up, Honey Boo Boo and Lance

Sorry for the delay in my blog, but I’m taking a writing class and it’s a bitch to get the assignments finished in time.   But, yes, I’ve tried keeping up with the news, and I won't be so tardy again.

Hey, aren’t the elections coming around soon?  And I hear that there’s this child sensation called Honey Boo Boo.  She’s a chubby little girl from a white trash reality show, and Rosie O’Donnell’s so taken with her, she paying for Boo Boo’s house renovations.  Cool, I thought, calling Rosie and asking if she could do my house too.  I’ll let you know when I hear from her.


And then there’s Lance Armstrong.  Nike and everyone else dumped him the other day because the newest doping evidence “is insurmountable.”
Really?  You mean it’s taken them all this time to figure it out?
According to a number of former teammates, the seven-time Tour de France winner bragged about how he suppressed a positive test in 2001.  The head of the lab admitted that the results were questionable but said that the science at the time could not further evaluate the results.
So why did the International Cyclist Union (ICU) refused to allow the US Anti-doping agency to re-examine the findings?
You see Armstrong is a generous guy.  In 2005 alone, he donated $125,00 to the ICU.  They were thrilled with the gift, and those personally involved said that the union worked closely with the cyclist for the succeeding years to come.
The ICU went on to say that they weren’t the only ones who knew about the positive results.
So they admitted it and covered it up anyway?  How did they get away with it? 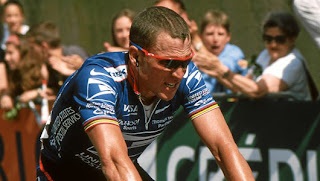 But you know, I still can’t help but admire him.  And I bet others do too.  It was more than chutzpah that pushed him up those mountains for three grueling weeks a year.   It was a steely, all-encompassing obsession that he’d fight to the end.  And he did.

Yes, he’s a cheat, but he raised $300 million for his cancer foundation.  And that wasn’t a fraud, only based on one.
Still, I wonder.  Would I buy a used car from this guy?  I’ll think about it and get back to you.
Posted by terry neuman at 11:15 AM No comments: