That Extra Hour of Zzzzz's and TV

As the economy still stumbles along, millions remain unemployed.  How are they spending their extra time?   Getting more projects completed around the house, revving up their exercise routines, going to church, volunteering for the needy?


All sounds good but doesn't even come close.

According to the U.S. Department of Labor, most people don’t want to mess with the big stuff.   And hell, when they’re out of work, many are depressed.  They can't even bear to socialize.

University of Michigan sociologist Sarah Burgard says, “It’s really hard to walk into a bowling alley or the Elks Club, and your friend asks you, ‘Did you get a job?”

According to statistics compiled by the U.S. Labor Department, the average American worked 3 hours, 11 minutes a day in 2009.

It doesn’t sound like much, but when stretched across the entire population, that’s millions and millions of minutes. Which got economists to thinking: if Americans were unemployed, they would probably take jobs that they'd previously paid others to do, like cooking, cleaning, handyman work. Seems like an easy way to make a buck. 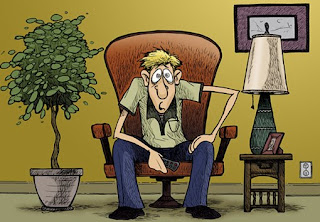 Except Americans didn’t bother.  Most just stay at the house.

Of course there are always exceptions.

Philip Sexton of Goldsboro, N.C. used to work 56 to 67 hours a week.  Today he only puts in 40, then comes home to cut the grass, runs to church to finish extra business, and visits his 82 year old mother.

But for the rest of us, we’d rather lie around and click to The Biggest Loser.

Men sit an additional 32 minutes a day longer in front of the TV than women—three hours, forty-five minutes in total.  Women sit less because they are busy doing chores, like housework, childcare, and taking care of the elderly.

But hey, don’t women usually get the job done?

And then they get tired and earn the nap.

Posted by terry neuman at 8:10 AM No comments:

Labels: That extra hour of sleep

From a Pacifier to an iPod 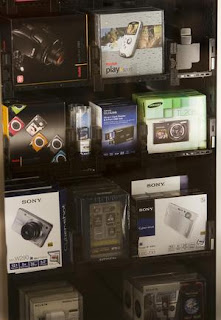 Need a pack of gum or a hot cup of coffee? Nothing’s easier than slipping your money into a vending machine—that is if it’s stocked and the coin slot’s functional.  Sandwiches, chips, candy—snacks and food are easy and quick.

So why not use them for more?

It's not like an employee who needs medical insurance or worker's comp, and never before have people been in such a hurry or have wanted so many things.  Now.  Yesterday.

Even Macy’s has joined the bandwagon.

A few years ago the retail giant got rid of its electronics departments and converted the space to vending machines that offered cameras, cell phones, iPods, and GPS’s.

People tried it and liked it.

Today Macy’s has four hundred E-Spots. The customers can’t touch the product or try it out, but using their smart phones, they can access the internet and look up the literature, or if they already know what they want, they can receive it in an instant.

Swipe that card and it’s yours.

What an idea, I thought, remembering the old vending machines my father used to have.

That was his business, setting up and servicing candy and coffee machines in gas stations, office buildings, and small factories in and around Detroit.

Gum was a penny, candy, a nickel a bar, coffee a dime, and cigarettes, always pricey, went for a quarter.

“How you going to make a living?” my grandfather had asked. “You can’t make nothing from a penny or two.”

Yes, he struggled most of his life and was always on call.  In those days there were no answering machines, cell phones, and hiring an answering service wasn’t affordable.  So someone was always home to take an emergency.

The candy machine is jammed, someone just broke into the cigarettes, the coffee machine flooded  water all over the floor.

My father was late for his own father’s funeral--a pipe broke in the coffee again--but if he were alive today, what would he think of things now?

You can rent a car or a villa or a week’s vacation through a vending machine.   A piece of paper slides through the slot giving directions where to pick-up the vehicle or where to meet the group for the trip.

Got a baby and need supplies? There’s Baby Station Vend in the Kansas City and Dayton airports offering diapers, wipes, pacifiers, and formulas.  Even the navy’s selling uniforms through its vending machine at some of its stores.

(As an added safeguard to prevent losing big bucks, your credit card doesn’t activate until the product sits in your hands).

But no matter how far we’ve come, we still deal with the lowly candy bar.  If you pay for a sweet, and the machine suddenly jams, you still want to kick it and jog out your coin, and try your luck again.

To hell with the iPod or the Porsche for a Sunday drive.

When you’re hungry, and there’s no one around, you’d give anything for a taste of milk chocolate, a crunch of nuts, creamy caramel… 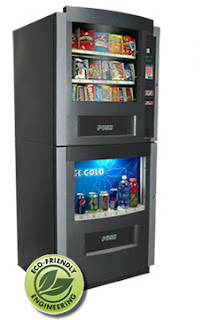 And hey, that’s the fun of it.
Posted by terry neuman at 1:41 PM No comments:

The Goats Have It 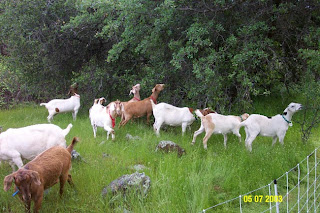 What’s the hottest thing you can do to go green, get your grass trimmed, and chomp those nasty weeds into oblivion?

You can go to Rent-a-goat.com or if those little ruminants (you know what ruminants are, animals with four parts to their stomach) are busy chewing their cud, the Goat Lady can offer the perfect alternative.  Prices range from $200 a day for a dozen, to upward of $1,000 for larger herds of 100 or more.

At one of the Vanderbilt Mansions a small herd grazes on seven hilly acres and only costs two-thirds of what it normally does with lawn mowers, blowers, weed whackers, and all those other nasty things that clog up the air.

Of course while I'm reading this, I'm thinking.

I live across the street from a lake, and we have a pretty nice view--if weren't for the house directly in front of us.   Luckily ours was built off center so we do see the water and the occasional boat and skier, but it’s not lakefront, so I know it's not the same.

And after years of residing here, I'm tired of NOT seeing everything.  I want my own full view, my own show in front of me.

Of course, we’re not about to move because we don’t want to pay a gazillion bucks in property taxes for lakefront, so like the old adage says, if you can’t go to the show, then bring the show to you.

On  second thought, did somebody actually say that?

But it got me to thinking a little deeper.  I've never had any goats, never gave it a thought, but why not haul a few over?

I could have such a show going on that even the lakefront neighbors will finally turn their heads and stare across to this side of the street.   I don’t remember ever meeting these people—only identifying them by their do’s. 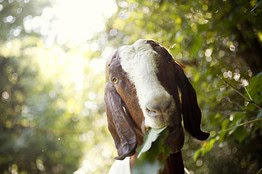 And I know nothing's perfect.  Can't forget the poop problem.
But manure makes good fertilizer, so that’s another bonus.  And I'll make sure not to leave any goats around after the sun goes down.  One owner kept his goats in a trailer over night, and coyotes surrounded it, howling until morning.

Boy, how the neighbors loved that!

But all I want is my own show in front of my own house that’s more exciting than a bunch of waterskiers flying off a ski jump or the occasional alligator tearing after a dog.

As for the lawn itself, I’m not expecting perfection.

According to Steve Holdaway from Chapel Hill, NC,  “The goats did a fine job…and …the neighbors were amused.  Still given the tall grass… the goat company returned with a scythe to neaten up.  What you end up with is not a lawn-cut look.  It’s a munched [up] look.”

Yes, that should keep the people and the goats coming back for a long long time to come.
Posted by terry neuman at 10:05 AM No comments: