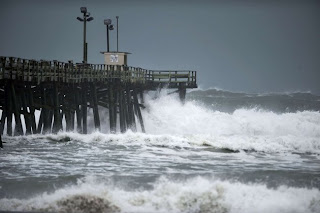 What’s the news of the week, Gadhafi?
Get real.
The Libyan people only think they’ve won a hard fought war for freedom.  If I'm reading correctly between the lines, the new regime will be a Shia government, regressing about ten centuries where the women live under colored sheets (also called burqas) and pretending to be submissive while the men beat them anyway.  Is this what they wanted?  As the cliche goes, be careful what you wish for.

But enough of the small talk.  Let's go on to the more important stuff.
The real story is that dangerous damsel Irene churning off the Eastern Seaboard.  Gratefully, she’s skipped Florida.  (Thank you, darling).  But she’s sweeping north, and on her way to our daughter in Virginia Beach.

Earlier this week it was all a big joke.  My husband kept telling her, “So long, it’s been nice to know you.”
It was funny for five minutes, but today, reality’s hitting.  She lives on Chick’s Beach, a few short blocks from the Chesapeake Bay, and she’ll be sitting out the storm, ready for Irene to roll into town.  Irene--shaking her booty like she’s been wired to the most energized bunny on earth before waltzing up the coast and battering her next set of victims. 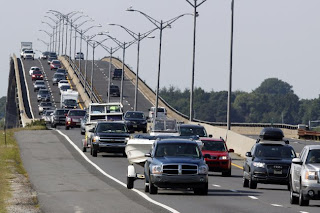 Philly’s got 8 million people, New York, 19.  And that’s not counting the rest of the 67 million in the way.  Jeez, this is getting complicated, even for a blog.
300,000 are trying to escape New York today while my hairdresser has reservations to fly out Sunday to the city, just to relax and see a couple shows.  Hey, I’m no fortuneteller, but I predict she’s gonna be stuck downwind of Disney with a ticket riding nowhere.
I told her she'd still be here next Tuesday, but then I got to thinking.  What if Irene turns around and Kendall somehow gets a flight, and then another hurricane blew by, and the poor woman never returned?  I started having nightmares of steel wool peeking out from under my forehead and behind my ears.  I know we're living through a national crisis, but I CAN'T survive looking like this.  Even wise men say life's a crap shoot.  First thing tomorrow I'm in for a color job. 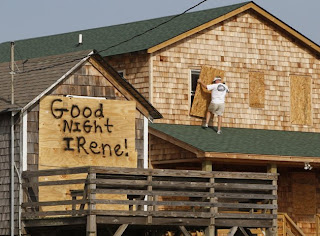 That problem solved, I still got my daughter in Virginia to worry about, and for the first time ever, they’re stopping the subways in New York and evacuating the very sick from the hospitals.  On top of that I got friends with grown kids in the city—one with a baby—and I’m frantic about them too.
But I think of Stacey—natch—riding it out in her house with three cockatiels—that’s why she didn’t leave—and batteries, and all kinds of cans: veggies, fruit, soup, juices, tuna, and other crap.  Dr. Oz would approve.  So does her mother.
Nothing else I can do now but pray.
I hope you’ll all join me for the millions who are left in harm’s way.
“Let everyone live through this safely, Lord.  Good night, Irene.  And good riddance.”
Posted by terry neuman at 7:17 PM No comments:

“Lizzie Borden took an axe and gave her mother 40 whacks;
When she saw what she had done, she gave her father 41.”
Yes, this is the awe-inspiring jump-rope ditty of the famous Falls River, Massachusetts murder that happened over a hundred years ago in 1892.
The most popular theory is that the 32 year old spinster Sunday school teacher, enraged that her miserly father forced his wealthy family to exist in poverty,  lost it one hot August afternoon and chopped her stepmother and father to death. (Actually, just two or three hacks to each did the job quite nicely).
She was eventually acquitted by a jury but not by public opinion.  The town became obsessed with the murders, which spread through the rest of the country.
Today, sleuths travel from far and wide to study the double homicide and arrive at their own conclusions.  Did the father, Andrew Borden shun an indoor toilet, decent clothes for his two daughters, and even hot water in the house?
Michael Martins, curator of the Lizzie Borden Museum, argues that no he did not.  The girls dressed well and ate fresh swordfish, but many people, even those with money, didn’t have hot water.

No hot water with three women in the house?

There was also the rumor that Mr. Borden was leaving all his money to his wife.  Turns out he planned to leave her well, but he did deed a house to his daughters.  Maybe it was a small one and not good enough Lizzie.

But over the last century some of the townspeople decided there must be another side to Ms. Borden and started collecting all things Lizzie.  After nine years, they completed their tome called Parallel Lives.  It’s 995 pages long and just short of 7 pounds.  Right now it’s locked under tight security until its release later this month.
The authors conclusion?  They believe that Borden is innocent.   Come on, are they serious?
No, I haven’t seen the book, nobody has, but I don’t think for minute that she is.  Sweet letters written to children in her later years prove nothing.  All evidence at the time of the crime point only to her.  It comes down to Lizzie’s word alone.  Was she telling the truth or not?   There wasn’t any forensics back then--no fingerprints, blood, DNA, no NADA.  But no other suspect was found and nothing was taken from the house.  When the cops questioned Lizzie, she kept changing her story.
Sounds guilty to me.

Now after all these years, there’s suddenly fuss about her innocence? There really isn't any new evidence.
Besides, they NEED this legend.

Falls River used to be a mining town, but that’s long gone.  All they got going is this whodunit.  The Borden home is now an inn offering ghost tours while the rest of the city services the crime.  They also got these great blogs, “The Hatchet Journal” and “The Noble Order of Mutton Eaters.”  The latter refers to Mr. Borden ordering his daughters to eat rotten mutton soup.
I go with the rotten mutton.  I go with the miserly father.
Lizzie Borden took an axe and whack, whack, whack…


She was desperate for good food, fancy clothes, and a hot shower.   I'd kill for a hot shower, so I think that’s motive enough.  The jury's wrong.  She did it.  And thank God I solved the case.
Posted by terry neuman at 9:17 AM No comments:

Well I wrote this great blog yesterday about how Congress skipped out of Dodge and left 70,000 construction workers and 40,000 FAA employees without a dime to pay their salaries for the next month to eight weeks—or until they got their butts back to Washington.

In the meantime, this little oversight would cost the American taxpayers $30 million dollars a day.

Who cares, the senators said.    Just regular business in our capital city.


Except they weren't coming back to September.   That's what the outraged people said.
So yesterday, after they’d left, Congress suddenly and miraculously came to an agreement, and today, most of the workers are back on the job.   How’d they do it so fast?   Did Congress suddenly develop a conscience?
Puh-leeze.

Mark Twain once said, “There is no distinctly American criminal class, except congress.”

So let’s not confuse human feelings with these garden gnomes we elected into our hallowed halls.  They had to save face ‘cause they simply got caught with their pants down.   Before they left town, all they had to do was sign off on these employees, and they all knew the problem existed.  The date had been looming for months.  Still, they had no second thoughts about escaping town.  Unfortunately, the media reported the story before they stepped out the door for their beach vacations--like they needed to relax and unwind.   And like Andrew Weiner, they got caught with a lot of  "splaining to do."

I wonder if the members of Congress realized that if they worked for the private sector, they’d be fired in an instant?
"There ought to be a day--just one--where there is open season on senators."  Will Rogers

(Okay, I had these terrific quotes from yesterday’s column that I wanted to fit in today).
Congress is that pile on the grass left for the pooper scooper.  Both parties intolerable, but look at the bright side.  At least I dug out a sample of American wit.
Amen.
Posted by terry neuman at 5:46 PM No comments: