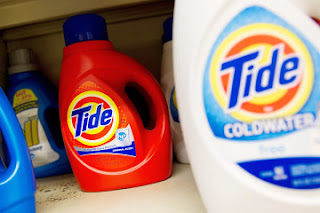 Have you heard about the crime wave sweeping the nation—or should I say sudzing away bottles that used to perch quietly on our grocery store shelves?

One day in March, 2011, Safeway Supermarket called the Bowie, Maryland cops and said they’ve been robbed repeatedly—$10,000 to$15,000 a month--and in every incident the only product taken was Tide.

Tide?  You mean that bright orange jug of laundry detergent that’s been around forever?

Millions of folks swear it’s the only formula that gets their clothes clean, but so what?  Who cares?  Well it turns out  a lot of people do, particularly drug dealers who make gobs of cash and buy the best in clothing--these guys also covet spotless shirts and demand the best in detergent.  And the best is Tide.
When the Maryland cops arrived at Safeway, they found a theft in progress.  Two men were piling a hundred bottles of Tide into the trunk of their Honda.  The next day when a TV crew arrived to tape the story, one crook took advantage of the distraction to clear away another twenty jugs.

The news spread across the country, and so did the crime.  What in the name of dirty clothes is going on?


Using surveillance tapes, the cops caught some of the criminals and asked why they were stealing the product.   They not only confessed, but bragged about their feats.   No, they hadn’t cleaned out the shelves to include it in their recipe of homemade meth but used the suds to barter for the drugs themselves.  A 150 ounce bottle of Tide purchases five to ten bucks of weed or crack cocaine.   Is that such a deal? The drug dealers thought so and began calling the detergent liquid gold.

What a story, I thought, checking the history of the brand itself.  Did you know that Tide, created by Proctor and Gamble in 1946, was the first laundry detergent introduced to the public?  And it instantly changed the world.  Before that, the average person owned less than ten outfits, wearing them many times, and scrubbing them by hand with soap or ground-up flakes. 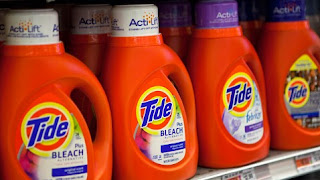 Seeing the need, P&G invented an easier way to clean clothes, and after many long trials, invented Tide.   Wha-la!   It was the iphone of its day—innovative, state-of-the art, and revolutionary.  It not only changed the world of retailing, it changed my closet, and that's noteworthy to me.

But somehow those gentle suds grew up and went wayward, now leading a life of infamous crime.  So caution to everyone:  watch your detergent.

Measure each capful and lock away the remainder.  You never know when thieves might crash your pad, ignoring those sparkling diamonds, flat-screen TVs, and that ancient Picasso under bullet proof glass.   Forget the usual stuff.   The druggies are going for liquid gold.
Posted by terry neuman at 11:48 AM No comments: 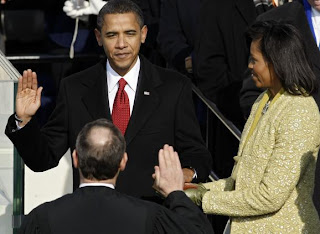 Well January 20th will be here tomorrow, and Obama’s second inaugural’s is set to go.   Yet somehow this week I didn't t feel the excitement that I felt four years ago when the first black president was sworn into office.   I don’t know why, but it all seemed so routine.
I woke up this morning and knew I was wrong.   The inauguration IS special.  Set by traditions and the changing communications of our times, it’s our history, and  I know I’ve got to get revved up again, so I started going back to learn how unusual this day really was.

Did you know that presidents used to be sworn into office during March?  That meant that the lame duck president did nothing much for four long months.  Congress finally changed the date to January 20th, and Franklin Roosevelt was the first to be inaugurated on that day in January, 1937.

Of course George Washington set many of the precedents practiced today.  Sworn into office in New York, he was the first to place his hand on the bible, first to use the phrase, “so help me God,” and also set the tradition of giving an inaugural address.
Thomas Jefferson was the first to take the oath in Washington D.C.  After his second inaugural, he rode on horseback from the Capitol to the White House, setting another example for the future.

On November 22, 1963, Kennedy was assassinated, and Lyndon Johnson was the first to be sworn into office on an airplane.  It was also the first time the oath was administered by a woman, U.S. District judge, Sarah T. Hughes.    In August, 1979, after Nixon resigned, Gerald Ford was the first president NEVER to have won a national election.

And who gave the longest and shortest inaugural speech?  By far, the longest was William Henry Harrison’s in 1841.  Without the protection of a top hat or overcoat, Harrison spoke in a snowstorm for an interminable 90 minutes.  Shortly after he caught pneumonia and died a month later.
And the shortest speech?   Washington spoke only 135 words during his second inaugural address.

But did you know that women, too, struggled to be part of our inaugurations?
It wasn’t until the late 1800's that William McKinley's wife was allowed to stand beside him as he took the oath of office, and it was another thirty years—thirty years!—during Woodrow Wilson’s second inaugural in 1917—that women were allowed to participate in the parade.

Clinton too made history when his second inaugural address in 1997 was the first to be broadcast over the internet.

So what about tomorrow’s  proceedings?   The video will not only beam all over the world but will touch the astronauts working in space.  Yes, we agree technology's an amazing feat, but how about the inaugurals themselves?  Despite tragedy and calamity, our traditions are solid and have demonstrated our country’s continuing stability.  How many other countries can even claim half of that?

Yes it’s exciting because it's an American creation.   Barack takes his final oath tomorrow, and I wouldn’t miss it for the world.
Posted by terry neuman at 1:29 PM No comments:

Icons: the Strength and Fun of a Curious City


I’ve always been fascinated by icons—seemingly ordinary people, who just by being themselves, come to symbolize the city and the times in which they live.

Like Richard J. Daley, former mayor of Chicago.  He was also the father of Mayor Richard M. Daley but don’t get the two confused.  Junior never reached his father’s heights—his father’s omnipotent grip that squeezed the Democratic party machine in Chicago during the turbulent fifties and sixties.

Daley was last of the big city bosses—the one who ordered the attack against the protestors at the Democratic Convention in ‘68 that led to the infamous trial of the Chicago Eight.  He was Chicago until he died in 1976.

On the lighter side, there’s Tony Lepore, the dancing cop of Providence, Rhode Island.   27 years ago, Tony became bored while directing traffic and started dancing in the middle of the street.  People laughed.  And Tony laughed too.  And as they say, a legend was born.

Now 65 and retired, the Providence mayor invites him back to the same crossroads each Christmas to do what he does best.  “He’s a Rhode Island landmark, an icon…a mini celebrity,” says Michelle Peterson of Warwick.  And he still puts on quite a show.
Yesterday I learned of another icon, Vivian Brown of San Francisco. The eighty-six year old woman, eight minutes older than her identical twin Marian, died last week of Alzheimer’s.  The two eccentric sisters, both wild about clothes and known as the Brown twins, walked the streets of the city for over forty years in matching outfits while greeting tourists and posing for their cameras.

It seemed their entire life was an act to entertain others.  At five one and weighing 98 pounds, the twins graced the town with their smiles and fashion, never breaking character until Vivian became forgetful.
If a stranger asked where they were born, the two would break into the Glenn Miller song, “I Got a Gal in Kalamazoo.”  They both shared the honor of co-valedictorians at their high school and graduated Western Michigan University with B-plus averages.  They also claimed to have driven twin white Oldsmobiles out of a Michigan dealership.

But tired of the cold, the two immigrated to San Francisco in 1970.  There they worked as secretaries in separate offices and spent their earnings on the latest fashions and fads.  First notorious, they soon were loved by everyone they met.

Before yesterday, I’d never heard of the Brown Twins but saw their pictures and kept on reading.  What a pair!  And what a set of icons for a city that lives and breathes individuality and the spirit of the soul.
Posted by terry neuman at 5:52 PM No comments:

After hugging, kissing, and swearing at congress, the New Year brings even more delightful treats.   We’ve added lots more words to our over-sized sacrosanct dictionaries—the Merriam-Webster and Oxford for starters, but all the other ones too.
Slang that used to be way out there is now accepted as regular lingo though some are odd and even downright ridic, a new word short for  ridiculous.  Sound crazy?   Ever hear of vajazzle?  It’s a verb about adorning the pubic area of women with crystals, glitter, and other decorations.  Actress Jennifer Love Hewitt allegedly vajazzles all the time.

How about soul patch?   It's the small tuft of facial hair below a man’s lower lip.    And brain cramp—an instance of temporary mental confusion.   A vegetarian can develop brain cramp if he becomes a  flexitarian—one who normally eats no animal protein but occasionally includes meat or fish.
I never heard of earworm before—a noun that means a song or melody that keeps repeating in one’s mind.   I do it all the time.  Now it's got a name.
And here are some others:

Gassed—adj.—drained of energy, exhausted.
Shovel-ready, adj.—ready to start work
Toxic—an asset that used to hold value but presently cannot be sold on the market.  Yep, I knew that already.

And how about these:  We’ve been talking about our “bucket lists,” and now the phrase is official.   There’s Oprah’s aha moment, the f-bomb, (come on, you know what that means), a game changer, life coach, energy drink, man cave, and e-reader.  Whew!

A popular one is mash-up.  According to Merriam-Webster, it's a noun that happens when something is created by combining elements from two or more sources that have never been together before.  This can mean anything—a music trailer using two or more divergent rock groups, a mixed up politician, who contradicts himself from his earlier speeches, or any combo that brings another prospective.

Did you ever hear about copernicium—a new chemical element, and of course, underwater too.  The latter has dominated the news these last few years because it occurs when a person owes more on a house than it’s worth.   Aha!  I got it.

Posted by terry neuman at 5:42 PM No comments: