Political Morons: Who the Hell's Running for Public Office

I gasped when  Todd Akin  classified rape as “Legitimate,” and said  that women can prevent  pregnancies  by shutting down their bodies.   Was he an idiot or a liar?  Turns out he's both.  He's also a member of the dumbest and most dangerous party America's ever produced:  THE TEA PARTY.  I can't believe they are still running strong.  Like that bastard McCarthy, who destroyed hundreds of lives before getting caught, it seems no one's got the guts or the common sense to ask what's in the briefcase.  What are these animals trying to do?

After Sarah Palin, with an I.Q. of a pet rock, I now  wonder how we ever got these idiots.    These aren't regular Americans, folks.  They're the fringes.  They're the far right, the evangelicals, a group so ignorant, it takes my breath away.  When reporters questioned Akin about his lies, he first said, it was  in the heat of the moment.  It  wasn’t.  He said it slowly and deliberately.  Check out the tape yourself.   Hopefully he will lose his Senate race,  but  the sick effect remains, like an insidious virus spreading its deadly bacteria.

Rudolf Guiliani asked, “Where have the regular Republicans gone?  You remember them, Reagan, the old man Bush, and the former John McCain?  The new John McCain's suddenly dumbed down too.  He forgot his American history.  He now says we’re a Christian nation.  Oh yeah?  John Adams, Thomas Jefferson, and the constitution beg to differ.   Look up the quotes and the amendments.
What do the people drink that makes them so far out stupid?   I know one could say that stupidity stretches to both sides of the aisle, but when did they lock all the pro-choice people away, and the ones that truly understand the economy and international affairs.   Who gave the keys to the imbeciles?

Speaking of imbeciles, Sarah Palin thankfully dropped out the 2012 election, but she bequeathed Michelle Bachman to the rest of the world, a close second in the truly slow and dull department.  Bachman said that the battle at Lexington and Concord  was  fought in New Hampshire.  She didn't know Massachusetts?   By the way, the line came from a well prepared speech—not in the heat of the moment.  But when questioned later on the Laura Ingraham show, she offered this defense.
“We all know there’s a double standard in the media….  as we know all 3,400 members of the mainstream media are part of the Obama contingent.”
That piece of work blamed it on the media!  Not only is she an idiot, but a coward too!  Same with Todd Akin.  He said that he had been  misinformed about rape.  Really?   I wonder who told him about legitimate rape?  Who said that the woman’s body shuts down?    If he wins, it will be a sad day for America.    How can we ever survive AND flourish with genuine retards like these?

America!  The emperor's wearing no clothes.  Can't you see the truth?

I’ve prayed for another Harry Truman, but it’s impossible to project any common sense when the inmates from the asylum keep breaking down the walls.

Come on, America, vote the brainless off the continent.  Send them to an island and let them eat each other alive.   I don’t see any other way.
Posted by terry neuman at 8:53 AM No comments: 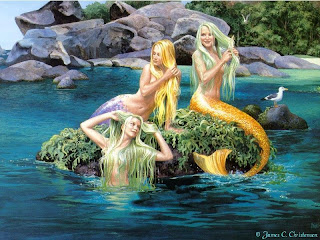 Ever want to be a mermaid?
Me neither, but I must be in the minority because people all over the world are fascinated with these mythical creatures.    And why not?   Who wouldn’t pray to be guaranteed gorgeous?   (Have you ever seen a mermaid with fat thighs and a hooked nose)?   And they’re ALWAYS in love.   It’s  a romantic image for women, but men, too, are drawn.

(A note to men:   They’re only female from the waist up.    Be careful what you wish for).

Still there’s an enchanting innocence about the mermaid that has fascinated folks for thousands of years.   How’s that for staying power?

Hans Christian Anderson published his fairytale, “The Little Mermaid ” in 1837, and a statue in her honor was completed in 1913.  Today it still sits in a Copenhagen  harbor and remains one of the most popular  attractions in Denmark.
In 1989 Disney released, The Little Mermaid , but Splash came out  five years earlier with Tom Hanks and Darryl Hannah.   If you want to know what a hit Splash was, think of the thousands of little girls growing up with the name Madison.   And we can’t forget Weeki Wachee Springs State Park.   The old Florida attraction just celebrated its 65th year in business, and business talks. 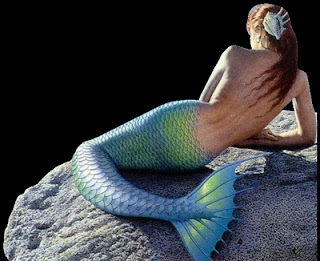 Last weekend Orlando celebrated the mermaid with a Mer-Palooza convention.    It was a two day affair that included a pool party and pageant, and mermaid lovers flocked to the city.

“I don’t have a tail, but I would really, really like  one,” said Sloane Shaffer, a twenty-four year old  attendee.    She regretted her budget didn’t allow for one  now.
But if you save enough dough, you can buy a custom-made tail from Mermaids R Us.   Opened a year ago, the store specializes in outfitting tails, tops, and accessories.  Each tail costs $1250 and takes a week to construct.  Owner Sandy Hoaglin created the costumes for Jimmy Buffet’s latest concert tour but receives most of her orders from plain people,  like a farmer in Nebraska.
During last weekend’s event, Enid Montalvo  took three hours to prepare.  The seventeen year old wore blue eye  makeup, rhinestones near her temples, a hair accessory decorated with shells, and a T shirt featuring Ariel from Disney’s Little Mermaid.

“’Mermaids have been my obsession since  I can remember.  …they’re like free-spirited, and fun and they’re beautiful and I’ve always wanted to be one."

Unfortunately, the price proved too steep at this time, and she settled for a few scales glued to her leg.
No worries, the ancient myth lives on, and the world is happier for it.
Posted by terry neuman at 5:38 PM No comments:

Well Haul Me Off to the Farm

Ever heard of Farm Ville?
You have?  Then you’re more with it than I—and that’s not saying much.   But I must’ve been in a coma or shopping for the next hurricane because Farm Ville’s the largest and fastest growing social game, and I hadn’t heard a word.

So what is this thing that's motivating millions to play each day?  Based on the Chinese phenomenon Happy Farm, Farm Ville is a social action game where players create and manage their own virtual farms.  It was introduced by Zynga in June, 2009.  Two months later the game had 11 million daily active users.   Today  over 70 million have joined, and the site keeps growing.

Located on Facebook, it’s heavy in social interaction.  Players can invite their friends and interact with neighbors.  But it’ll cost you.  Yes, you can plow those fields by your own hard labor, but it’s easier if you buy a tractor, lots of animals, a barn, a house, and even a neighbor.  You get the picture.   The farm and the community keep growing, and the game keeps costing real money.  And yes, it’s addictive.

My daughter’s friend Greg, who told me about this, had created a prosperous online farm when he suddenly decided to quit.  The reason?  He paid twenty bucks to fix his real truck but spent thirty bucks on his virtual one.

Hey something's not right with this picture.

Yet it’s funny about this farming adventure.

Remember the old saying, “what goes around, comes around?”
During the Industrial Revolution that began in the late 1800s, people left their farms in droves to take factory jobs in the city.  The new positions paid a steady salary, offered more security, and people were relieved to get away from the rural environment.

So less families farmed, which turned out to be good thing.  Over time, using the latest technology and science available, the smaller number of farmers got so proficient and produced such an abundance of food, that even more farmers left their fields and drifted into town.

We then became a nation of vast corporations, computers, too many lawyers, and lots of complications.
But over time people began yearning for a simpler existence.   They needed something to grasp, to build, something to call their own.

So why not go back to the farm where everything used to be simple?

Virtual farmers returned to the land, happily worrying about crops and drought and tractors breaking
down while a million more users join them each week.

I sit here amazed.
Posted by terry neuman at 12:26 PM No comments: