Credentials:  Must be old, set in his ways, and abhors change.
In fact, the guy must be at least seventy-five, crippled with gout, poor eyesight, and a heart murmur.  Though aging more rapidly than an arthritic dog, he’s not yet feeble—soft in the bones but strong enough to reject any innovations suggested for the
church.

He must also believe that condoms are evil, and when weighing the life of a mother and child, he’ll let the mother go, even if she has six other children praying for her at home.

Catholicism teaches that all women are inferior to men and that the entire sex is not to be trusted.  Even today women in the church still slave in lowly positions—nuns have no chance of climbing the glass ceiling because there isn’t any glass and no ceiling within reach.  There's no opportunity to succeed. 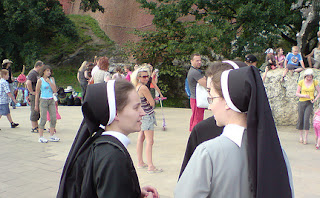 And did you ever notice how nuns walk in pairs?  The reason:  so they can keep an eye on each other.  Too bad the church didn’t order the same for priests.

Cardinal Bernard Law, his eminence from Boston, hid the rapes of many sick priests and allowed innocent children to be continually abused for years.  When the story was revealed, he fled justice and escaped to Rome where he is now sitting pretty in the Vatican.  Last spring he started an aggressive campaign against American nuns.  He ordered them to stop helping the poor and start pushing the Bishops’ agenda—bashing women and gays to divert the attention away from pedophiles.  So the nuns are supposed to hate other innocents?  What a guy.   What a church.

Oh how I wish for the good old days when popes had dozens of concubines, bastard children, and stole from the people.
At least back then you knew what they were doing.  Now it’s a crap shoot.  Yet we were all surprised to learn last week that the pope's resigning.  For those who are worried, relax.  There’s a broken-down clone waiting in the wings.
Posted by terry neuman at 5:46 PM No comments:

Where's the King? Under Aisle 2 in Bananas


God, the news is nonstop.

The cops roasted a cop killer in California yesterday, setting fire to the cabin in which he was hiding.  This was followed by the president’s state of the union address, which played out the day after the pope resigned.   And don't forget little Ethan, the five year old released unharmed from an underground bunker where a madman held him for almost a week.
There was also the story about Richard III.  Remember him?  He was the infamous king suffering from a severely curved spine, who was known for his ruthless pursuit of the crown.  Turns out he’d been lying under a cemented parking lot in Leicester, England for over 500 years.
Well the lot itself wasn’t old.  It used to be a church yard, and the body must’ve been carried there after the king’s fatal wounds at the Battle of Boswick in 1485.
Even Shakespeare wrote a play about him, and in the end the king cries, “A horse!  A horse!  My kingdom for a horse!”

Well the old bard didn't get it quite right.

According to witnesses, Richard’s final words were, “Treason!  Treason!” which sounds more authentic because Richard was no Shakespeare.
He was a king, and a killer.

Most historians believe that he murdered his two young nephews, who stood before him in line to the throne.  Though Richard was ultimately crowned, he only ruled for two years and died at 32 because Henry Tudor was also vying for the job.   (Henry became Henry VII, father of Henry VIII and grandfather to Elizabeth I).  The present Queen Elizabeth traces her roots to the Tudors.

So the Battle of Bosworth was a significant turning point in English history.  Upon spying his enemy, Richard charged ahead, killing a few of Henry’s men before contending with John Cheney.  Large and abundantly brave, Cheney blocked the king's way and thrust him into a marsh where Richard landed with his horse and was trapped in the muck.

According to a Burgundian historian, “Unhorsed and overpowered, the king was hacked to death by Welsh soldiers.”
This got me to wondering, I mean about parking lots.  We got thousands all over America, and many are built near battlefields, graveyards, and over many extinct country churches.
There could be notorious criminals, heroic Indians, pirates, or even a desperate monarch buried beneath.  And lest we forget,  isn't Maury Povich still on the air testing DNA of deadbeat dads?

I say it’s time the old man ushers out the bums and starts peering under the cracks.   I realize our country’s never produced a single monarch, but I bet a king during the Middle Ages might’ve murdered a few too many and needed a place to cool off.    Escaping to the docks, the ruler sailed across the ocean.  Upon landing in America, though he didn't know where he was, he began shouting so many orders that the crew had had enough.  Figuring that they'd never get caught in the new world, they silenced the tyrant forever.
Which brings us to now.   There's been a rumor floating around that a long ago monarch is lying under an ancient Winn Dixie.

Heck, I pass of couple of those every day.  Call Maury and tell him to bring a couple swabs.  Maybe we'll find ourselves a king.

Posted by terry neuman at 2:14 PM No comments: