Santorum and the Dark Ages 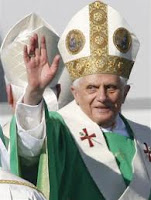 The other night on CNN Rudy Giuliani wondered where all the moderate Republicans had gone.   Somehow they suddenly disappeared. I think millions of others are wondering too.  All we got left are a bunch of right wing evangelicals, so out of touch with the majority of Americans, that I don't recognize any of them.   Who are these creeps?

It’s like the Middle Ages all over again, where everyone’s ruled by the pope and the population was generally ignorant—I mean truly stupid—you know like the earth is flat and alchemists spin ordinary metal into shining gold.


The pope is still several centuries behind, only about four hundred years.  In 1633, Galileo was excommunicated for believing in heliocentricity—that the sun, not the earth, was the center of the universe and that the earth rotated around it.   Never one to forgive easily, the pope finally acknowledged the church's mistake about twenty years ago.  Actually, Columbus had already founded the west, but the pope wouldn't accept that as evidence.  I guess after thousands of pictures from space showing that our planet was round, all misdeeds were finally withdrawn.
Whew, that was a close one.
Now we’re down to Catholic birth control and Rick Santorum, who takes the word of the Vatican like God himself  was the burning in the bush beside him.   Has the man even glanced at the statistics?  According to Newsweek, 98% of sexually experienced American Catholic women have used birth control.
Maybe his mother used contraception during some time in her life.  Too bad she forgot to use it the night he was conceived.  Oh, but I digress...

55% of all Americans believe contraception should be included for free in all health-care plans, and 58% of American Catholics believe contraception should be included for free in all health-care plans.
The Republican Party embracing the practice of the strictest rules of Vatican is so absurd, that it would be laughable if the end result wouldn’t become the leader of the free world.   Santorum is nothing more than a sick joke that gets sicker every time he opens his mouth.  I don't know much about the Latter Day Saints but Mormons couldn't be worse than this.
Do you remember that the minute George W left office, Obama gave the green light for stem cell research?   Today, we may see the cure to cancer in our lifetimes, and we may even grow new organs just by using our own cells.  But they'll all be shut off.  They'll be gone.  It'll be the dark ages once again with Santorum.
He’ll fight to take away lifesaving research, and woman’s birth rights, and worse.  Even the Catholic women don’t like that.  Guess they’re a lot smarter than the pope.
Posted by terry neuman at 11:42 AM No comments:

Labels: Honey Boo Boo and Lance, Santorum and the Church, trying to keep up

Lost in a Time Warp with Hudson

My husband and I just got back into Orlando from Atlanta.  Our daughter Barbra gave birth to a son, our first grandchild—yeah!--and she and her husband named him Hudson.  Hudson?   It’s neat, but an odd choice, I thought.   I grew up in Detroit, and that was the major department store, the place where the Schwartzes spent most of the little discretionary income we had; the retail establishment where my mother paid the minimum each month so that we could keep charging a tiny bit more.    Yet we loved that store though the bill kept growing, and my mother always said that we’d never get rid of Hudson’s.  Years later we finally bought ourselves out of debt, but if anybody ever told me that my grandson would carry the same name…
Yet it's a grand sturdy name, an historic one, and I'm proud that we'll be calling him that forever.
But you know it’s funny about being away from home and keeping busy—helping with the feedings, laundry, grocery shopping, and other errands.  Somehow I got turned around, swallowed into a time warp, like half my brain got sucked in a vacuum.  I was walking and talking but not completely there.
Bob and I took a break and ran to the mall for a couple hours.  We strolled into Nordstrom’s and I beelined to the sales’ racks--because that's what I always do-- and picked up a couple of T-shirts at 50% off.   Though I could’ve paid with my Visa, they offered to look up my Nordstrom’s card.   When the salesclerk asked me for the last 6 digits for my social, I spit the numbers back.  But when she asked for my zip code, I stuttered, then paused.  I tried again, using a couple combinations, then a few others until I couldn't think anymore.

Jesus, I forgot my own zip code!
I stood there feeling my cheeks burn, wondering if my body would self-ignite and end this misery once and for all.  (The salesclerks were hysterical.   I thought one was going to collapse to the floor).
But if my brain was even working at 20%, I could’ve remembered to open my wallet and read my license with my address and seen the numbers in front of me.  Instead, I called my husband and asked him the burning question.   He joined the hysteria.
A few minutes later, the transaction completed, Bob was standing beside me.  Afterwards, I needed to use the restroom, and he waited outside.  We then sauntered around a few minutes when I realized I had left my bag in the stall!  My God.   Was this a nightmare? And why didn't I leave the bag with him?  I always do.
I sprinted across the floor to the bathroom.  Gone, as I knew it would be, and I reported my loss to the clerks at another desk.   They called customer service, but not surprisingly, no one had turned it in.   So it wasn’t meant to be, I told myself.   So everyone is forgiven for forgetting their zip code and leaving their merchandise behind.  Or are they?    Maybe I got the early stages of…
DON'T SAY THE WORD.
Or maybe they're just senior moments.  Yes, people make mistakes all the time.  But these were so stupid...    “What’s my grandson’s name?” I asked myself as we made our way to the car.  “Hudson,” I answered before my husband had a chance.  Got it.   Then I’m okay, perfectly fit--at least in the b.s department, and today, that's the only one that counted.
Posted by terry neuman at 7:07 PM 2 comments: