I Wanna Big Wheels for Christmas 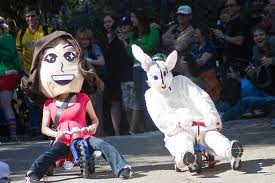 I always loved Big Wheels.  I loved watching my kids fly down the drive, admiring their closeness to the ground, their speed, the utter thrill of racing.  Of course sometimes they zoomed by too fast, and I warned them to slow down, yet I was always a little envious.

As a baby boomer I got born in the wrong generation.  We only had those regular sized trikes where the rider sat upright and pedaled in short stunted spurts.  Working hard, we got nowhere fast.   An anesthetized turtle in the next lane had an even chance of finishing first.

But I always wanted to try one.    And I remember I did.  Squeezing into the seat, I attempted to fit my feet on the pedals without slamming my knees against the handlebars.  Two pedal moves later, I was done.  For once, my legs were too long.
But not anymore.  Matt Armbruster, 44, a member of Generation X, felt that the Big Wheels were the symbol of his childhood freedom and wanted to ride them again.  Not able to fit on the miniature trike, Armbruster became the manufacturer and sole employee of High Roller USA, a company that produces adult sized Big Wheels.

Yes, they’re for grown-ups!  But unlike the plastic structures of his childhood, the new ones sport steel frames and “are designed for people who change diapers instead of wear them.”  The cost, $600 each.

Am I the only one excited?
In 2000, the first Bring Your Own Big Wheel Race was held in San Francisco on Lombard Street, one of the crookedest roads in America.  This year the number grew to 1,500 and moved to Vermont Street, with most adults still struggling with the kid-sized Big Wheels though more and more were riding on the adult sized racers.

Two other companies are also producing the models, fashioning the Big Wheels into shiny steel machines that have one rubber tire up front and two plastic ones in back.  This provides less traction, making it easier to spin out.
Spin out?  Never thought of that.  I just wanted to race down the drive, and then maybe keep on going.  How about over to Disney and then across to the beaches, and up the space coast...

Okay, I’ll probably get winded by the end of the cul-de-sac, but at least I’ll have tried it.   And I’m grateful for the thousand-plus Big Wheels buddies from Generation X and Y.  They’ve kept the spirit flaming, kept their childhood dreams alive.

Posted by terry neuman at 6:20 PM No comments:

Where Have All the Heroes Gone?

Wonderful General David Petraeus, the symbol of truth, honor, and the American way--Superman to me and to millions of others--succumbed to the sins of the flesh and utterly destroyed his reputation and his entire life's work.

The man who stood for integrity is the star of a truly trashy story, where his mistress Paula Broadwell sent angry emails to a woman in Tampa she believed also desired the general.  And now they say that Broadwell might have revealed state secrets.  And then there's Petraeus' wife Holly, who's madder than hell.

Well how about us, the believers left blowing in the wind?  Who do we got left?

A couple weeks ago I wrote a disparaging but sympathetic blog about Lance Armstrong and sort of defended him at the time.  What was I thinking?  He's a slug and a criminal to boot.  People with excellent reputations and their livelihoods to lose, risked everything to support the insurmountable evidence against him and stand by the truth.

Yet yesterday that bottom feeder tweeted a picture from his family room where he lay on the couch surrounded by his seven jerseys.  NONE of those jerseys belong to him.  He stole them all and jokes about them now.

"Where have you gone Joe DiMaggio, a nation turns its lonely eyes to you..."

During the height of the Vietnam War, we thought that America was crumbling into hell.  Kids were dying but nobody was listening anywhere in Washington.  Who could we trust?  Would you buy a used car from tricky Dick?

And so the story continues.  Yesterday another champion bit the dust, or became a dust bag, whichever you prefer.  Jeff Gordon--never my hero--but to thousands of others, he stood for something.  Yet he deliberately wrecked Clint Bowyer's car in Phoenix, and they fined him a hundred grand.  They accomplished nothing.  The penalty was just a slap on the wrist because the hero showed no remorse.

That's what I don't understand.  How come so many people exalt in their own glory and then let it blow up in their faces?

I say forget the big and famous, and remember the regular folks who keep our lives real--the first responders, the men and women fighting overseas, the parents who sacrifice everything for a child, and the rest of the givers of the world.

I'm already bored with the Petraeus story.  I've mourned my hero, and I hope that America thanks him for his service and wishes him a good day.


Posted by terry neuman at 8:48 AM No comments: