The Olympians and Me 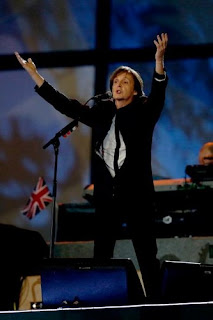 Did you catch the Olympic Opening Ceremonies Friday night?  They were funny, colorful, bold, and ultimately spectacular.  I loved that little cameo with the queen and James Bond.  Who knew the old lady could act?  And that ending with David Beckham driving a speed boat down the Thames, and Paul McCartney, looking out at the thousands watching, obviously realizing the massive historic moment, his voice cracking with emotion.

In my whole life I've never met an Olympian, though recently I've become acquainted with a woman, Anya, who works out at my gym and who’s presently training to win a place on the American team for the winter Olympics in Sochi, Russia.  Her expertise:  the skeleton.   “What?” I asked.
“It’s like the luge but safer," she said.
I have no idea what she’s talking about but I’m still impressed.

Then just a few weeks ago I discovered that my workout trainer is very close with James Beckford, a former Olympian who graduated from Boone High School in Orlando.  Beckford competed for Jamaica in the Atlanta Olympics in 1996 and won the silver.  He came in just behind Carl Lewis in long jump.   Wow!
But lately Beckford’s run into hard times in Florida.  He wanted to stay in his beloved field and coach kids who also love the sport but found it difficult to make a living.  Several months ago Austria offered him a sponsorship, and that’s where he is now, working diligently under the support of his sponsor.
Anya, the one training for the skeleton team, said, “Get your sponsorship wherever you can.”
Lying on a mat a few feet away, I realized that I’ve never considered the problem of sponsorship.   “You know I’ve worried about everything in the world but that,” I said.   “How come I missed it?”
Finishing a couple dozen sit-ups, I rolled to my side and breathed out.  “Oh I know why.  I got a husband.  He’s my sponsor, and I can do anything I want.”
Everyone around me laughed, Anya the loudest.
But I’ve come to realize that besides the intense training and dedication that dominates an Olympian’s life, the athlete needs financial support, beyond his parents, to achieve his ultimate goal.
For many years I’ve worked to supplement our income, but I knew it was never enough.  So did I do the world a favor by not searching for sponsorships?   No, I did the world a favor by marrying well.
I
Posted by terry neuman at 8:15 AM No comments:

Labels: Honey Boo Boo and Lance, The Olympics and Me, trying to keep up

One Strange Week in a Hot July

The news was horrific—12 dead, over 50 wounded, and all of them young. The oldest, according to one report, only 31.  The identities and personalities are just coming out, and we see their pictures, study their faces, and hear from their family and friends.

So what happened?  Fans rushed to see the latest Batman flick and and a gunman opened fire.   The action on the screen paled to the reality beneath it.
I could barely absorb the story because these last few days, even before the massacre,  have been surreal--a strange, weird week playing up to the drama in Aurora.  We got in from Canada Tuesday—an exciting, fun-filled vacation to Montreal and Quebec City.  Running around like maniacs so we wouldn’t miss a sight, I was relieved to go home.  But landing in Orlando seemed different somehow.  Things weren’t quite what they seemed.


When I turned on Channel 2, WESH TV, I heard the latest local news report—the usual drug arrests, murders, and even a pedophile.  But the call letters on the bottom of the screen came from a foreign station—a small unknown town in Pennsylvania.
Did Pennsylvania invade Florida while we were partying up north?    Funny, it never made the news.
But what difference did it make where the stories originate?  Unfortunately, all cities have drug arrests, car accidents, and domestic abuse.  It all sounded the same to me
Nevertheless, I kept checking the call letters, finally recognizing the familiar WESH on the late news Thursday evening.  They're back, I thought.  But what the hell happened?  The Orlando Sentinel ran a story the following day explaining that Brighthouse and NBC couldn’t come to terms on their contract, and the cable company pulled the plug. 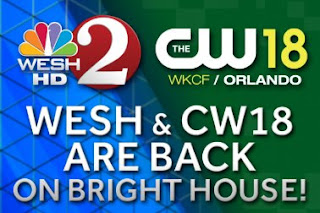 Hey, maybe that’s not a bad idea.
Not that I have anything against Channel 2, but if the local news is basically generic, we could rotate reporters, and the viewers could listen to everyone else’s drug deals and car jackings.  No one would notice the difference, and what a savings it would be!  They could invest their profits into education.
Then the news hit yesterday about the massacre in Colorado.


I kept thinking I’m thankful I didn’t live in Aurora, grateful I’d never consider attending a midnight showing, and who cared about Batman?  Anyway, bad things always happen Out There.
Of course I’m kidding myself.   We all know the massacre didn’t have to come from Colorado.  We could’ve heard the news from Ames, Iowa, or Chicago, or Smalltown, PA.
That’s the scary part.  Monsters can plant themselves anywhere and buy weapons at the corner store.  So we hope everything will be fine, and in time, we believe that things will get back to normal.  Isn't that how life's suppose to be?  We pray for the victims’ recovery while we pray for our own futures, imploring a higher power that it shall never happen again.
Posted by terry neuman at 9:53 AM No comments:

Is Holm a Big Putzke?

Did you hear the one about banning circumcisions in Cologne?  It’s no joke.  Some judge in Germany, concurring with the idiotic conclusions of law professor Holm Putzke, forbid circumcisions without the consent of the patient.
You mean at eight days old?  That’s when circumcisions are performed in the Jewish religion, and the ceremony is considered a covenant with God.  Muslims also perform circumcisions whenever the family prefers and joined the Jews in protest.  Yes, you heard right.
Protestants and Catholics immediately followed fearing that the decree would limit their freedom of religion.
The illogical law only applies in Cologne, but thousands of Jews and Muslims reside there.

So what’s with this Puzke?
A law professor and disguised racist—come on, you know what he is—wrote an obscure article five years ago claiming that circumcisions violated German law in causing bodily harm to the patient.  Putzke called it child abuse.  (I don't think he's ever seen a real case of one).   But at the time nobody paid attention, so how did this issue ever come to court?
A four-year old Muslim boy suffered post-operative bleeding after a doctor performed a circumcision.  A second doctor treated the boy and notified the cops.   So it ended up before a judge who read Putzke’s words and banned circumcisions unless the patient’s life was in danger.  Otherwise, the patient must consent to the procedure.
“This is not simply a verdict from some misguided court,” Putzke argued after the verdict was issued.  Oh really?  Did anyone tell the jerk that a fundamental right is freedom of religion, and that Germans demand this right, along with the rest of the free world.

A few nuts paraded in defense of the law, but to the Germans’ credit, the country's against it, and government officials want the law overturned.
I wonder if Putzke ever witnessed a newborns's circumcision and followed a baby's rapid recovery.  In contrast, a boy feels significant pain when he’s circumcised at an older age.  To this day I’ve never met a man who can recall his bris, or the subsequent discomfort that followed.  Disregarding religious traditions, which one is more humane?
But Putzke pushes ahead.  “This decision could not only influence future jurisdiction, it could also lead the relevant religions to change their attitude with respect to the fundamental nature of children’s rights.”
Is he smokin’ crack?  Judaism is 5,000 years old.  You think they’re going to change their traditions because of a nut in Cologne?   I think Putzke deserves some closure, and I don’t mean a simple circumcision.  I say we call on Lorena Bobbit, who hacked off her husband’s appendage in the early nineties, and request that she return for a final engagement.
It’s only fair.
Posted by terry neuman at 11:58 AM 2 comments:

A Week of Notable Passings

I gasped at the news that Nora Ephron died.   She's gone?    But she couldn't be.   I loved her!   Who'd ever forget her rich, funny films, her books, her magnificent quotes.
In my sex fantasy, nobody ever loves me for my mind.
If pregnancy were a book, they would cut the last two chapters.
Marriages come and go, but divorce is forever.
A wry observer of life, Ephron was loved and admired by millions of women, and I was one of her devoted throng.   “I try to write parts for women that are complicated and interesting as women actually are,” she said.   And she did.   She showed other writers how it’s done, but nobody had her gift of gab or insight into the angst and joy of being a woman.
Ephron lived in the here and now and told it like it was.   In this politically overcharged year, she said, “As for the men who are running for president are concerned, they aren’t even people I would date.”
Me neither, Nora.   Thanks for everything.
Don Grady also left us this week.  I hadn’t thought of him for years, but I was reminded that he was an original Mouseketeer while I remembered he was the big brother in “My Three Sons” after Tim Considine left the show.  Lots of girls had crushes on Robbie Douglas.  He was cute, funny, down-to-earth, and born with the infinite patience that would try Mother Teresa’s soul.
And we can’t forget Lonesome George.   Bob and I met him a year and a half ago when we traveled to the Galapagos Islands off Ecuador.
George was the only tortoise found on Pinto Island in 1971.  The last of his species, the excited scientists were desperate to find a female.  A call was put out to the world.  Did any zoo or farm have a Pinto Island tortoise?   In the early years of the Galapagos, anyone could take an animal off the premises.   Today things are so restricted that a man caught sneaking out a chameleon last year was jailed for five days.
They never found another, so other females were brought to his side.   They flirted with George but to no avail.
He waved them all away.
So they called him Lonesome George, yet he was hardly alone.  Journalists, scientists, visitors, and other tortoises clamored to meet him.   He was about a hundred when he passed a few days ago, which is not very old for a tortoise.  Thinking about it, I’m not surprised.  Didn’t researchers find that single males don’t live as long as couples?
I only hope George finds peace in turtle heaven and finally reunites with his tribe.
Posted by terry neuman at 9:12 AM No comments: