Well this is it, December 31st, 2011, the final day of the year.  I asked a bunch of people this week what they were doing tonight.  The younger ones, like my daughters, were both going out—dinners, nightclubs, concerts, but the older ones—the old fogies like you know who--were either staying home or going out to eat and then back home or to a friend's.  Quiet.  Safe.  Most were praying they could keep their eyes open till midnight.
“But if Dick Clark could do it…”, someone said.   That would be their first challenge for 2012.
I tried to remember our many new years’ eves and most blended together.
We once we paid a bundle to see the Fifth Dimension in the early nineties.  I was so excited.  They used to be huge with their hits “Aquarius’ and “Wedding Bell Blues.”  Yes, they'd been sliding in the charts, but with Marilyn McCoo’s perfect voice, and the rest of the group.  I didn’t care that they hadn’t had a hit in awhile.  Kids had no taste.
Thrilled, I sat at the edge of my seat, applauding deliriously when they made their entrance and continued clapping until the group wasted half the concert swooning to gospel songs.  What the hell were they thinking?   I wanted to shake them till they got some sense in their heads.  Did they think it was a revival on a Saturday night in some Iowa cornfield?  All they needed were a couple cripples tossing their crutches to the winds.
No, the New Years I remember most is the one I spent in the hospital 38 years ago.  We were on our way to a party when my water broke.  “Couldn’t be,” I said to Bob.  “It’s ten days early.  I'll change and we'll go to the party.”
“I think we better call someone.”
After arguing back and forth, we finally dialed the doctor while my husband prayed for a tax deduction.  But Stacey never accommodated us.  She always arrived on her own good time—that morning a few minutes before ten on January 1st. 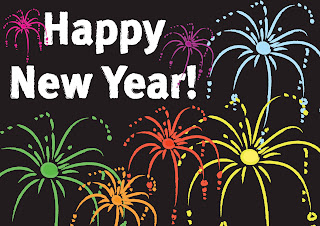 A new years’ baby!  They're supposed to bring good luck and this one lived up to the adage.
That got me to wondering how many babies are born each day in the world, and the best anyone can guess is 440,000.  So under a half million will make their appearances tomorrow.  Good luck to all you new parents, which also got me to wondering if there were any famous folks born on the New Year ’s Day.


And to all you humans, thank you so much for reading my blog, and may the coming year bring good health and prosperity.  Remember to smile.  It’s just a lot more fun that way.  Happy New Year!!
Posted by terry neuman at 10:58 AM No comments:

What Ever Happened to David Goldman?

I love the end of December when the networks and cable channels reminisce about the last twelve months, and you pause to think about the people who’ve passed.   Some you didn’t realize had died, and you emit an unconscious gasp while others you mourn all over again.

Can we ever find another Steve Jobs, Andy Rooney, Christopher Hitchens, or Elizabeth Taylor?  What a loss to humanity.

I was talking to a friend about it, and we were naming more names when I wondered what happened to David Goldman.  Remember him?   His ex-wife snatched their five year old son Sean in 2004 and flew him to Brazil.  It was only supposed to be a vacation, but once there, she announced she’d never returned.  She remarried and died in childbirth--I applauded her death--sorry, but she deserved it--and David was left fighting his former in-laws and the widowed husband through the Brazilian courts for custody.   It was an endless battle lasting a heartbreaking five years.
I remembered it concluded around Christmastime.   “Just last December,” I said, but I was wrong.  Turns out it had been two years already, in 2009.  Sean was nine.   Today, he’s eleven.   His father David calls their time together, “a miracle.”  He’s also written a memoir about their saga called, A Father's Love.
Their update is now in the book, but to offer you a summary, this is what has happened.
A former model, David is now a fishing boat charter captain and real estate agent and has become an advocate in helping others who have had children abducted to another country by one parent.  As he flew his son home two years ago, Goldman said he’d allow Sean to visit his grandparents, but that hasn’t happened.   Last March the boy’s maternal grandfather died of cancer, and Sean did not want to call his grandmother—he said he always felt too much pressure on the phone—but sent a card instead.
However, Sean seems to have made a real home in New Jersey.  Goldman’s taught him how to ride a bike, swing a baseball bat, and helped him with lots of homework.  He’s getting A’s and B’s.
In April Brazilian inspectors came to check on Sean and the condition of their home.  Of course Goldman passed, but I find the inspection itself an outrage.  What right do they have to interfere with this family after that mother committed the criminal act of kidnapping her own son?   Brazil then harbored this felon and then defended the step family, forcing the Goldmans to remain apart and continue suffering emotional and financial duress.   It wasn't until Hilary Clinton and President Obama himself stepped in, that the boy was finally released.  While in Goldmans' home, David presented the Brazilian authorities a letter from parents from six countries whose children have allegedly been abducted to their country.   To date, no one else has been freed.
But the Goldmans themselves are great.   It’s Christmas now, and everything’s bright and shining and blinking with store-bought lights.

So Merry Christmas, David and Sean, and may you celebrate a hundred more.
Posted by terry neuman at 11:54 AM No comments:

Labels: Whatever happened to David Goldman

Callista Gingrich: The Possessor in the Right Angled Suits

So far the public has endured 17 Republican debates, and familiar faced Newt is galloping on top of the heap.  He said one of his secret weapons is his third wife, Callista.   She’s kept a low profile, so people haven’t talked about her much, but they’re starting to notice how the lady dresses.

She's developed her own tailored uniform, rich, exacting, with straight, boxy shoulders on her ever present designer jackets, platinum helmet hair--rigidly cut and coiffed, and makeup painted against her pores and not to be retouched.  In fact, nothing is to be fussed or mussed.  Perfection can’t be duplicated.
In her early days in Washington, Callista used to be simpler.  She modeled a swingy layered hairdo and a more relaxed dress code, like many upscale overachieving Americans.  Not anymore.  Today she clings to clothes with instructions that seem to be spit from her Blackberry and dictated daily with slight variations.  Nobody looks like her but eighty-five year old widows in twenty-million dollar mansions surrounded by French provincial furniture and artwork of the Madonna and Child. 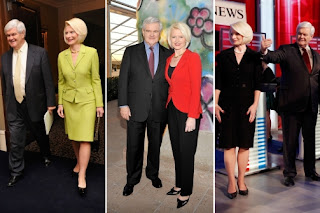 In our all too casual society where folks stroll around town in torn T-shirts and tanks that barely cover one’s breasts, Callista comes off looking like a waxed doll that never got fifty-feet near the flame.  She's only 45, but I got a funny feeling that she's more rigid than Queen Elizabeth.  I hear the queen eats her cereal out of a Tupperware bowl and walks around her many palaces flipping off the lights.  Maybe Callista's just insecure and wears her severely tailored style like a shield to fend off natural human contact with others.  After all, she never married a prince, only Newt, who got kicked out of congress for ethics violations he committed in 1998.
Then again, this is the digital age, and the silent majority found their voices years ago and have been shouting ever since.  I also understand looks aren’t everything, but Bess Truman’s long gone and Mamie Eisenhower’s bangs died with her.   Still I can’t find a genuine anything about Callista.   Too bad Newt’s crazy about her, though the man’s been known to change his mind—again and again and again.  They say last June his sixteen staffers quit en masse because of a fallout with his wife.   Really?   So the woman’s got a mouth?  Some called her a dictator.  That means she not only dresses like the old Gadhafi, she just might be him, or maybe, like Putin, the possessor behind the throne.
Uh-oh.  Stick around.  I can just hear the tales to come.
Posted by terry neuman at 7:37 AM No comments: