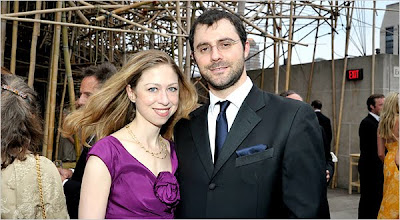 Little Chelsea Clinton’s getting married this weekend, and I thought I’d get invited, but they made this rule that only those who know the bride or groom can come.  But how about all my memories?  Don’t those count for something?

I can even picture what her old nose and chin used to look like when I realized that we made the same restriction--not about the nose--but about knowing the couple when our daughter Barbra got married last January.

Which got me to wondering.

What other things do our weddings have in common?

Theirs cost a whopping 3.2 million—I can’t even imagine—while ours was… Let’s just say “the point two” would work well in our budget with funds left over to feed the homeless in New York and L.A through the rest of the summer.

As for the guest count, it was reported that 400 are coming in for the Clintons’ shindig.  We had a respectable 166 and had to settle up with the hotel 72 hours in advance for all of our guests.   As of this morning the New York Times reported that the Clintons still didn’t know if the Obamas were attending, and they’re paying 6,000 bucks a head.  My God.  That’s twelve grand for a couple of no shows.

In our case we also paid extra for the band’s dinners, so that the musicians wouldn’t go hungry, but if the Obamas make an appearance, we’re talking Secret Service, pilots, hair dresser, assistants…

Can the residents on Pennsylvania Avenue get a group rate for the help?

It's all been very secretive, but at least we know it’s at the Astor Courts in Rhinebeck, New York, nestled in the Hudson Valley not far from Franklin Roosevelt’s home in Hyde Park.

Yeah, but what are they serving?

At ours, the guests had a choice of sirloin or mahi mahi, but what do you get for six grand?

I’ve been calling all day but nobody’s talking, so here’s my guess:

Choice of wine from an unlimited cellar, the stripper of your choice (Bill’s suggestion), chocolate bar, cheese bar, sushi bar, McDonald’s and fries (also Bill’s suggestion) pheasant under glass, over glass, behind the glass…

And what about breaking THE glass?

Marc Mezvinsky’s Jewish.  Chelsea’s Methodist.  Will she convert?  No one thinks so, or that’s what the media says.  Of course, the Methodist minister can handle the ceremony alone, as can the rabbi. Or the two can perform together and orchestrate the specific traditions.

Of course, we only had a rabbi, but I bet that the two clergy will join together because I can see Marc smashing that bundle into a mass of slivery shards.

Later, speeches will be given.  I hear the father knows how to talk, like Bob but much better, and has a rip roaring life to back him up.  The mother too lives a path of nonstop excitement, though she’s not the public storyteller her husband’s become.

And then sometimes, no matter how much you spend, everything turns out the same.

And that the no-shows finally show.
Posted by terry neuman at 6:14 PM No comments:

I was working out the other day at the gym, peddling hard on the elliptical, when the giant room darkened with black clouds and a crack of thunder crashed throughout the facility.

I jumped on my machine, then giggled   Wow! That was something, I thought, quickly coming back to earth and then glancing around at the others.  A few were also smiling.  Like me they had also been stunned but soon resumed their unnatural pace.

Keep going, I said to myself, diligently peddling to nowhere in order to continue my cardio workout while hoping that they rain would subside before I finished.

After cooling down and schmoozing with a few of the women, I grabbed my workout bag and purse from the locker room and climbed the stairs to the entrance, clutching the tiny umbrella that I carried in my bag.  Too small to do any good, I thought, eyeing the mini maelstrom as I but pushed ahead outside.

I stood against the building under the overhang and waited.  The lightening stopped but I was afraid of getting drenched.  One step closer to my car, I thought, but just like stomping on my elliptical, going nowhere.

Another girl stepped outside.

“I just have this little thing,” I said, holding up my folded red umbrella.  She nodded, holding only her purse. We talked a couple minutes, and then I looked away, figuring.  I turned back to her.   “Would you like to take my umbrella, go to your car, and then drive back here and give the umbrella to me?”

“Really?  Thanks!”  She grinned. “And just for trusting me,” she said. “I’ll leave my purse with you.” She dropped it on the cement. “Too heavy to carry.”

I must’ve looked surprised. “Sure.  I'm a coward in the rain, but if nothing else, I’m trustworthy.”

She thanked me again as I handed her the umbrella.   Opening it, she scurried into the lot.  From a distance it looked larger than I thought and covered her well.   Returning a few minutes later in a gray SUV, she yelled through the passenger side window, “Come on in, I’ll drive you to your car.”

Grabbing my workout bag, her purse and mine, I climbed inside.  She drove me around to my car and handed me back my umbrella.  Thanking her, I asked her name.

She laughed and waved goodbye.   I laughed too.


I made a new friend today.   And all because of the rain.
Posted by terry neuman at 8:44 AM No comments:

Labels: Two women in the rain 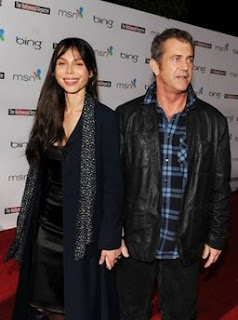 Mel Gibson’s having a terrible week, which means that's a great week for me.

After his rant against the Jews in 2006, blamed for his drunken state, he promised to be good but shot off his mouth again, this time against blacks and Hispanics, using the "N" word, and calling the latter “wetbacks” and lots and lots more.

Ya think that qualifies as a bigot?

A lot of people excused him four years ago because after all, it was merely the Jews, except for Barbara Walters.

Joy Behar revealed that Gibson’s been banned from “The View”.
“Barbara’s Jewish, he’s an anti-Semite, he’s a racist…so he’s done.”

But this time.  THIS TIME…

Four sets of tapes surfaced this week from phone conversations with his girlfriend Oksana Grigorieva, and no one from Gibson’s camp denied that they're false.

And how about Mel, star of What Women Want, beating his girlfriend at least two different times and knocking out her teeth?

I'm not sure he'd qualify as the leading male spokesman for the female sect.

His agent, William Morris, dumped him last Friday, and his friends have shied away, except for Whoopi Goldberg, who makes it clear that she doesn’t condone what he did but swears that he isn’t a racist.

You know how the neighbors come outside after the “peaceful” guy next door just slaughtered his family and claim that he was such a wonderful man with a kindly word for everyone?

This time, Ms. Goldberg, you goofed.

Gibson's parents denied the Holocaust, and Gibson himself fudged its existence when questioned.

And you think Passion of the Christ wasn’t a hate driven film?

This week evil reared its ugly head again as lovable Mel self-destructed in front of millions.

It warms my heart good.
Posted by terry neuman at 10:06 AM No comments:

The Japanese Say, 'I Don't"

Everyone seems to be going to weddings lately, but more than a few are suffering through painful divorces (Are there any other kind?)


The divorce rate in Japan is also rising--about two out of every six marriages.  Thinking about this, Hiroki Terai came up with a bright idea.  The Japanese have created rituals for every important aspect of life, seemingly all the beginnings and endings, but nothing for divorce.

Calling himself the "Charisma Divorce Planner," Terai bought a Divorce Mansion this past April to perform a ceremony for the end of a lousy marriage.

For $606, couples are signing up to say “I do” for a final time in front of friends and family.

And there's all kinds of new rituals too.

The parting couple meets near a temple and rides in separate rickshaws.  Friends and relatives follow on foot to the ceremony.   There Terai addresses the guests on why the couple has decided to separate without any blunt statements pointing specific blame but generally covering it indirectly.

A spokesman for the couple, usually a divorced friend, wishes them congratulations.  At the end of his speech, people aren't sure whether to appaud or not.  Instead, most of them fidget while waiting for the climax, which is the highlight of the evening:  the smashing of the rings.

“I base it on the image of cake cutting,” Terai says.  It is their “final joint act.” 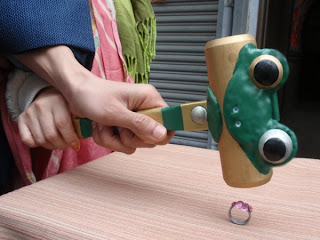 Holding a hammer with the head of a frog—the symbol of change in Japan—the couple crush both their wedding rings.

Instantly, the mood changes into happiness and relief, and the audience bursts into applause.

Mr. Fujii, who participated in a recent ceremony, felt, “Oh this is the end of it, really.” His wife agreed. “The moment I saw the smashed ring, I said to myself, ‘Yes! That feels so good.”

As of June, Terai’s conducted 23 couples back to the single life.  He says he’s gotten hundreds more requests, but they didn’t reach the final stages because… and this will come as a shocker…

The couples wouldn’t work on it together.
Posted by terry neuman at 9:37 AM No comments: 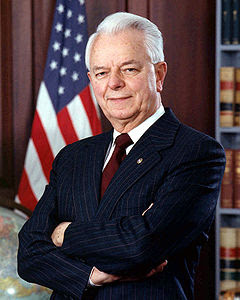 This past week Robert Byrd (D-West VA), the longest serving senator in the history of our country, died.

He worshipped the senate and loved to hear himself speak—yes, he was a character—but more important, and more sickening, he was the Babe Ruth of pork barreling—taking 3 billion from the taxpayers for his home state of West Virginia.

It is a legacy we should never forgive or forget.

In the early days he was even worse.   He joined the Ku Klux Klan and later apologized, but in 1964 he participated in the filibuster against the Civil Rights Act.

He was older by then, and I thought he’d given up his racial hatred.  So he didn’t?  Had he been lying all this time?

So he told tall tales, took gobs of money, and then refused to retire when his mental and physical health began to decline.   Giving up any chance of a dignified exit, he continued his long-winded, sometimes nonsensical rhetoric, while still keeping one hand in the pot.

Today he lies in state in the Capital Rotunda, and our black president will say a few kind words.

How many people can spend their lives lying and stealing billions of hard earned taxpayer money and get buried with honors in the end?

It’s been a long creepy journey.

Bye bye, Mr. Byrdie, and good riddance.
Posted by terry neuman at 9:26 AM No comments: